Biohaven Pharmaceutical (BHVN - Free Report) announced that its pipeline candidate, verdiperstat failed to meet the primary and secondary endpoints of the phase III study evaluating it in patients with multiple system atrophy (“MSA”).

Data from the late-stage study demonstrated that treatment with the selective, brain-penetrant, and irreversible myeloperoxidase enzyme inhibitor, verdiperstat, did not statistically differentiate from placebo for the study’s primary endpoint of disease progression.

Additional analysis of the study data is still pending. Full data from the study will be presented at a future scientific meeting.

Shares of Biohaven have gained 55.1% so far this year against the industry’s decrease of 1.3%. 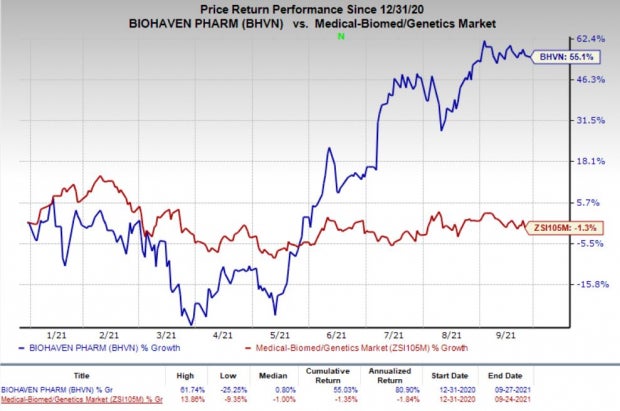 Biohaven stated that although the mechanism of action for verdiperstat by targeting brain inflammation seems to have failed in MSA patients, the mechanism rationale remains strong in other disease states. The company is currently evaluating the candidate in collaboration with Massachusetts General Hospital in patients with amyotrophic lateral sclerosis. Enrollment in the study is expected to be completed in the fourth quarter of 2021.

The company is also developing two other pipeline candidates, troriluzole and zavegepant. A phase III study is currently evaluating troriluzole in patients with spinocerebellar ataxia. The top-line data is expected in the fourth quarter of 2021 or early 2022. The company is also developing the candidate as a potential treatment for obsessive compulsive disorder in two identical phase III studies. Top-line data from these studies are expected in the second half of 2022. A phase III study is evaluating intranasal zavegepant as an acute treatment of migraine. The top-line data from the study is expected later in 2021.

Biohaven also has a commercial product, Nurtec ODT, in its portfolio. The drug is approved as an acute and preventive treatment for migraine. The oral anti-CGRP drug has demonstrated strong uptake since its launch in March 2020. Total revenues, solely from Nurtec ODT, were $92.9 million in the second quarter, up almost 112.1% sequentially. Nurtec competes with other FDA-approved anti-CGRP drugs including Amgen’s (AMGN - Free Report) Aimovig, Lilly’s (LLY - Free Report) Emgality, and especially AbbVie’s (ABBV - Free Report) oral drug, Ubrelvy.