Joe Machi, director of alliances at Federated Hermes, remarked, "The successful completion of this transaction is the result of Federated Hermes' experience with similar transactions, our client-centered approach and our long-term relationship with Hancock Whitney Bank.”

The acquisition gives the shareholders of the funds access to the company’s manifold range of investment strategies, substantiated performance and comprehensive customer service capabilities.

In the last few years, Federated Hermes has inked strategic deals and thereby, expanded operations in the U.K. and Chile. Notably, the company continues to eye alliances and acquisitions to expand its business in Europe and the Asia-Pacific region as well as in the United States and the rest of the Americas.

Federated Hermes currently carries a Zacks Rank #4 (Sell). Shares of the company have gained 1.2% over the past six months compared with the 13% rally recorded by the industry. 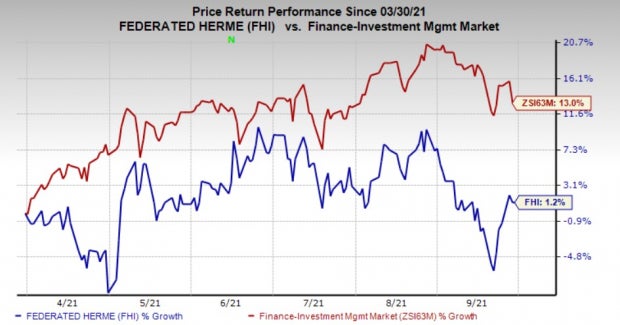 Acquisitions have been on the rise in the banking sector, of late. In the current scenario, banks are moving toward consolidations to dodge the heightened costs of regulatory compliance and increased investments in technology in a bid to remain competitive. The prevalent low interest-rate environment and other economic challenges following the pandemic have taken a toll on banks’ profitability.

U.S. Bancorp (USB - Free Report) has entered into a definitive agreement to acquire MUFG Union Bank’s core retail banking operations from Mitsubishi UFJ Financial Group (MUFG - Free Report) for a cash-and-stock transaction valued at $8 billion, in a bid to boost its presence on the West Coast. The deal’s closure, expected in the first-half of 2022, is subject to the satisfaction of customary closing conditions and regulatory approvals. No shareholder approvals are required from the companies.

Chevron (CVX) Delays $45B Tengiz Project Work Due to Coronavirus