In the past week, American Airlines (AAL - Free Report) grabbed headlines by virtue of its code sharing deal with India’s IndiGo. Through this deal, American Airlines aims to facilitate travel to India for its customers. United Airlines (UAL - Free Report) entered into a similar agreement with the South African carrier Airlink. The Chicago-based carrier intends to boost connectivity between the United States and South Africa by virtue of this pact.

United Airlines was also in news for the wrong reasons in the past week. The carrier was fined by the U.S. Department of Transportation (DOT) to the tune of $1.9 million for violating rules pertaining to tarmac delays.

1. The DOT imposed a fine amounting to $1.9 million on United Airlines, which currently carries a Zacks Rank #3 (Hold), for allowing multiple flights to remain on the tarmac for hours. This is the largest fine slapped by the government for lengthy tarmac delays. Per DOT, the airline had kept onboard several passengers on 20 domestic and five international flights from December 2015 through February 2021 at various airports throughout the United States. A total of 3,218 passengers were affected in tarmac delays since they were not given a chance to deplane.

In a separate development, the agreement between United Airlines and Airlink will offer one-stop connections from the United States to more than 40 destinations in Southern Africa. Additionally, the Chicago-based carrier will connect its loyalty program with Airlink, thereby becoming the first carrier to do so.

2. Per American Airlines’ agreement with IndiGo, the former will place its code on 29 of the latter’s domestic routes in India. This will offer American Airlines’ customers an access to 29 new routes from Bengaluru and Delhi. The airline is set to launch a service between New York and Delhi on Oct 31, 2021 and between Seattle, WA and Bengaluru on Jan 4, 2022.

Subject to the U.S. and Indian governments’ approvals, the codeshare agreement is expected to begin next month. Following its enforcement, members of American Airlines’ AAdvantage loyalty program will be able to earn miles while travelling on flights operated by IndiGo that have the code of the former.

4. Ryanair Holdings’ (RYAAY - Free Report) CEO Michael O'Leary reportedly expects the carrier to perform very well in October, backed by its strong booking trends. The European carrier expects to carry more than its target of 10.5 million passengers next month. Per the CEO, Ryanair sold 80% of the additional 60,000 seats it recently added following the easing of COVID-related restrictions.

Driven by increased traffic, Ryanair raised its 5-year traffic growth forecast from 33% to 50%. The story was reported in detail in the past week’s write up. 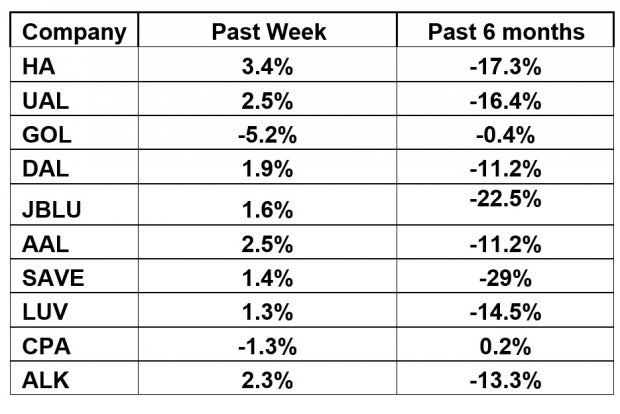 The table above shows that the airline stocks, barring shares of the Latin American carriers Gol Linhas (GOL - Free Report) and Copa Holdings (CPA - Free Report) have traded in the green in the past week even though the gains were muted in nature. The NYSE ARCA Airline Index has risen marginally to $97.40. Over the course of the past six months, the NYSE ARCA Airline Index has dropped 9.7%.

Investors will await September traffic reports from the likes of Ryanair in the coming days.