Read MoreHide Full Article
The Boeing Company (BA - Free Report) recently clinched a follow-on contract for providing sustainment services to a fleet of C-17 Globemaster III transport aircraft. The contract has been awarded by the U.S Department of Defense.

Valued at $23.8 billion, the contract isfocused on reducing support cost andadding workscope over the period of ten years.  As part of the contract, Boeing sustainment services willprovideengineering, field support and material management for the global fleet of 275 aircraft. Through the contract, Boeing also intends to improve the aircraft readiness.
The contract also has the provision for additional funding for new work scope involving international staffing to boost maintenance efforts and cyber security work statement. Per the terms, Boeing will lower operating cost per fligh thour for the fleet as well.

C-17 Globemaster III is a military transport aircraft that can carry large equipment, supplies and troops directly to small airfields in harsh terrain anywhere in the world. Boeing has been in partnership with U.S. Air Force on C-17 sustainment since 1993. It serves as the primary strategic lift aircraft for the U.S Air force for global transport of troops and equipment.
With an emphasis on delivering high performance at relatively low cost, Boeing provides sustainment and maintenance for global C-17 customers in eight allied countries.
The C-17 fleet has best-in-class combined dollar per flight hour and mission capable rate, performing at the highest level of readiness worldwide.

Rising geo-political tensions globally have resulted in countries strengthening their defense system. This has led to a huge demand for defense products. Consequently, combat aircrafts have also recorded a surge in demand over the past few years. The United States, which is the largest exporter of military weaponries worldwide, is thus focused on strengthening its military resources.
This is quite evident from the allotment of a $52.4 billion investment plan, in the U.S. fiscal 2022 defense budget, for combat aircrafts. The plan includes approximately $4.8 billion investment for Boeing’s combat aircrafts. So, we may expect a solid flow of contracts from the Pentagon, like the latest one, which in turn will boost Boeing’s top-line performance in days ahead.

Per Research and Markets firm’s projections, the global combat aircraft market is expected towitness a CAGR of over 4% over the period of 2020-2025, with North America estimated to experience the highest growth. Such projections will not only benefit Boeing but other U.S. aerospace majors namely Northrop Grumman (NOC - Free Report) , Lockheed Martin (LMT - Free Report) and Textron (TXT - Free Report) .

In the past one year, shares of Boeing have gained 36.4% against the industry’s decline of 4%. 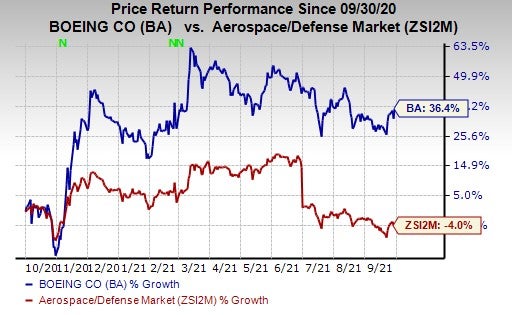