Project Vesta is a clean technology startup that is inventing ways to use sand to remove excess carbon dioxide from the atmosphere. It uses a natural rock, turned into carbon-removing sand, to accelerate the earth’s natural carbon removal process. Per the National Academy of Sciences’ report, this new sustainability approach has the potential of removing billions of tons of carbon dioxide from the atmosphere and reducing ocean acidification.

Great Lakes is the first member of the global dredging industry to join Project Vesta’s initiative that is recognized by universities and major scientific institutions, and has been highlighted in some famous newspapers as well as magazines.

Great Lakes’ senior vice president, Bill Hanson, said, “This partnership will help make Great Lakes a more effective participant in the effort to address coastal erosion and climate change impacts. We are proud to raise the bar on climate-change fighting technologies, and invite others in the coastal resilience industry to join this important cause.” 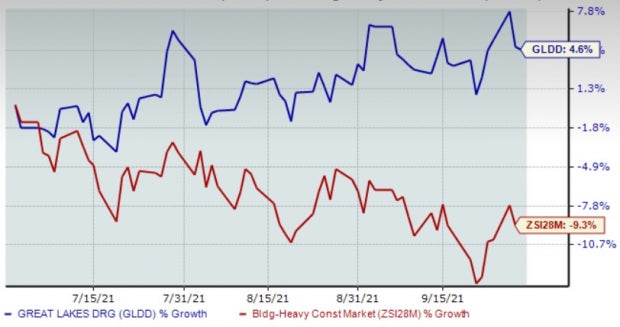 Shares of this Zacks Rank #5 (Strong Sell) company have significantly outperformed the industry in the past three months. Its shares have gained 4.6% against the industry’s 9.3% fall in the said period.

We believe the company’s strong bidding ability, and project execution will boost its performance in 2021 and beyond. The Zacks Consensus Estimate for third-quarter 2021 earnings is currently pegged at 29 cents, indicating a 52.6% year-over-year improvement.