Perrigo Company plc (PRGO - Free Report) announced that it has reached a settlement agreement with the Irish Office of the Revenue Commissioners for a Notice of Amended Assessment (NoA) involving a tax liability issued in 2018. The NoA was issued by the Irish authority for tax liabilities related to the sale of the Tysabri patents by Elan Pharma, the entity which Perrigo acquired in 2013, to Biogen (BIIB - Free Report) in 2013.

Per the settlement agreement, Perrigo has agreed to pay an aggregate of approximately $345 million (€297 million) as a full and final settlement of all liabilities raised by the Irish authority. The Irish authority has not imposed any interest or penalties on Perrigo and the latter will also get credit for certain taxes already paid and for certain unused research and development (R&D) credits, under the agreement. After applying the credits, Perrigo needs to pay a total of €266.1 million in cash to settle with the Irish authorities.

The original NoA issued in 2018 had claimed a tax liability of $1.9 billion (€1.636 billion). Perrigo had appealed to the Irish revenue department following the receipt of the notice. In 2020, the Irish High Court ruled in favor of the Irish Office of the Revenue Commissioners. The company also challenged the notice separately and it was assessed by the Irish Tax Appeals Commission. Following a rigorous battle, the company finally managed to settle the case with a significantly lower amount than originally claimed. The Irish Office has also agreed that it will take no action in relation to the NoA or any other Tysabri-related income or transactions in future, per the settlement agreement.

The removal of this major overhang at a significantly lower cost boosted investors’ sentiments and Perrigo’s shares gained more than 14% during after-hours trading on Sep 29 following the news. Shares of Perrigo have declined 2.7% so far this year against the industry’s increase of 1.4%. 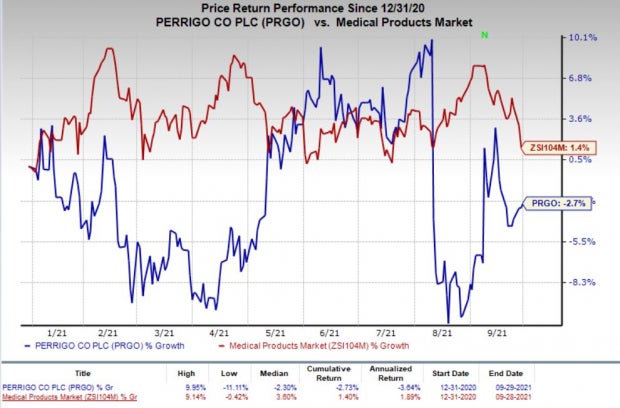 We expect Perrigo’s strong prospects following its restructuring into a self-care company coupled with the removal of the billion-dollar tax liability to likely lift the company’s shares going forward.

We note that Perrigo had initiated the transformation process to change itself from a healthcare company to a self-care company in 2019. The first key acquisition in this transformation process was of the global leader in private label oral self-care products, Ranir Global Holdings that has significantly boosted the company’s revenues in the past two years. This was followed by several other acquisitions over the period, including some market-leading OTC self-care brands from Sanofi (SNY - Free Report) , which further boosted the company’s portfolio. Earlier this month, Perrigo agreed to acquire France-based leading global consumer self-care company, Héra SAS, to add a portfolio of market-leading, high-growth over-the-counter (OTC) self-care brands.

As part of the transformation process, the company also divested its other portfolio of products, which includes the animal health business to PetIQ (PETQ - Free Report) in 2019 and generic Rx Pharmaceuticals business to Altaris Capital Partners in July 2021. The company is also planning to divest its Latin American businesses going forward. These divestments bode well for the company as it boosts Perrigo’s cash position as well as keeps its focus on strengthening and expanding its self-care business.