Citigroup (C - Free Report) tried to convince an appeals court to let it redeem about $504 million worth funds that were accidently wired to several lenders of the cosmetics brand Revlon, Inc. (REV - Free Report) , claiming its mistake did not accredit them to a mammoth fortune.

The case emanates from Citigroup's August 2020 prepayment of a $894-million loan for Revlon, that was not due until 2023.

Recently, a trio of federal judges in Manhattan heard both parties’ arguments, if they should reverse the lower court’s decision of Revlon lenders allowed to keep the money.

A lawyer for Citigroup, Neal Katyal, told the panel that the lenders should have been leery of the payments received because of no receipt of formal notice regarding Revlon’s 2016 term loan being paid off. The lenders had six "red flags" of the error, and they should not have expected the cosmetics company to repay them for another three years.

In February, the court had ruled that the Wall Street biggie is not eligible for a return of funds wired, on grounds that if an accidental transfer pays off a debt, the receiver is allowed to keep the funds, provided the latter is not aware of the error and has no role to play in it. It was based on the “discharge for value” defense, established by a 1991 New York court ruling.

In August 2020, Citigroup had transferred about $900 million to Revlon’s creditors, while intending to send only $7.8 million as an interest payment.
Though the lender was able to recover some of the amounts in what it explained to be a “clerical error”, about 10 creditors, including Brigade Capital Management, Symphony Asset Management and HPS Investment Partners, opted to retain the extra amount as debt repayments.

Revlon replaced Citigroup with MidCap Financial as its collateral and administrative agent on a revolving loan facility. This replacement forms part of an amendment to a 2016 loan agreement that extends the loan maturity by a year to May 7, 2024.

Despite taking measures to combat the rise in expenses, the company’s involvement in litigation issues might keep the legal costs elevated. However, it remains committed to executing growth strategies, and continues to make steady progress toward its financial targets.

Shares of the company have lost 1.6% over the past six months, against 9.5% growth recorded by the industry. 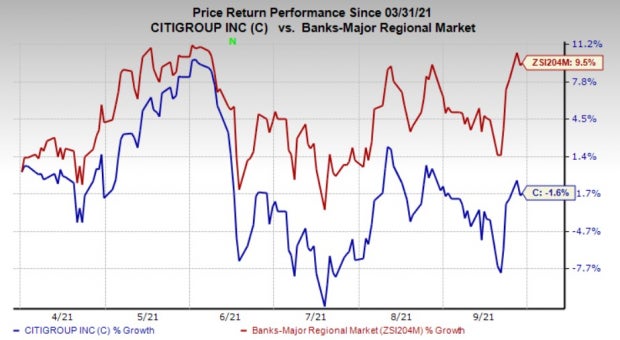 Several other banks continue to encounter legal hassles and are charged with huge sums of money for business malpractices.

Mitsubishi UFJ Financial Group’s (MUFG - Free Report) U.S. banking unit, MUFG Union Bank NA, has been slapped with a cease-and-desist order by the Office of the Comptroller of the Currency over its unsound technological practices. The regulator detected that the bank engaged in "unsafe or unsound practices" linked with its technology and operational risk management. According to the order, the bank was also in non-conformity with certain security guidelines. Nonetheless, Mitsubishi UFG is in progress with the "corrective action" and has "committed resources to remediate the deficiencies".