Asbury Automotive Group (ABG - Free Report) announced a mega deal to acquire Larry H. Miller Dealerships, the eighth largest dealership in the United States, and Total Care Auto (TCA), powered by Landcar, for $3.2 billion. The acquisition of Larry H. Miller Dealerships seeks to add nearly $5.7 billion in Asbury’s expected annualized revenues, giving the company an edge to execute its five-year plan to generate $20 billion in annual revenues by 2025. The acquired assets will include 54 new and seven used-vehicle dealerships along with 11 collision centers. The deal is also likely to enhance the scope of Asbury’s Clicklane omni-channel platform. Meanwhile, the buyout of TCA presents Asbury with an opportunity to enter the profitable F&I business.

CarMax Inc. (KMX - Free Report) reported second-quarter fiscal 2022 (ended Aug 31, 2021) net earnings per share of $1.72, missing the Zacks Consensus Estimate of $1.95 amid lower-than-anticipated gross profit per unit from the company’s used and wholesale vehicles segment. The bottom line also declined from $1.79 per share recorded in the year-ago period. Revenues came in at $7,988.4 million, beating the Zacks Consensus Estimate of $7,098 million and recording a 48.7% year-over-year increase. CarMax bought back 1.8 million shares of common stock for $200 million during the fiscal second quarter. The firm had cash/cash equivalents and long-term debt of $58.1 million and $2,190 million, respectively, as of Aug 31, 2021.

Ford (F - Free Report) announced its decision to extend $15.5 billion in revolving credit facility to encompass key metrics that are fundamental to the Ford+ growth plan and align with its approach of operating a safe, sustainable, and successful business. The innovative arrangement brings together extensions of three revolving credit lines that consist of a five-year $10.1-billion facility (maturing in September 2026), a three-year $3.4-billion facility (maturing in 2024) and another three-year $2.0-billion facility (maturing in September 2024). The renewal policies have been designed to be more inclusive to take into account Ford’s environmental, social and corporate governance initiatives, including the company’s stewardship in the electric vehicle revolution.

The Goodyear Tire & Rubber Company (GT - Free Report) announced a multi-year collaboration with Gatik, aimed at advancing the development of mobility solutions for the autonomous business to business short-haul logistics industry. Per the agreement, Gatik's medium-duty fleet will utilize tires powered by Goodyear’s SightLine technology. The deal opens new unexplored avenues for the tire maker, enabling it to gain experience about the implications of autonomous technologies in the increasingly important middle-mile delivery and logistics. For Gatik, the use of Goodyear’s advanced tire intelligence solutions is anticipated to help reduce fuel and maintenance costs, while improving vehicle performance. The partnership seeks to combine the state-of-the-art technologies of both firms to help bring more operational efficiency in the middle-mile segment.

Toyota Motor’s (TM - Free Report) subsidiary, Woven Planet Holdings, announced the acquisition of Renovo Motors in a bid to rev up its autonomous vehicle (AV) technology. The acquisition will enhance Woven Planet’s open vehicle development platform, Arene, which is scheduled for market introduction by 2025. Toyota expects Renovo to aid Arene function across multiple automakers’ platforms. Woven Planet has been committed to investing in automated driving to bring it to the market and this is the company’s third acquisition in less than a year. The financial terms and conditions of the deal have not yet been disclosed. 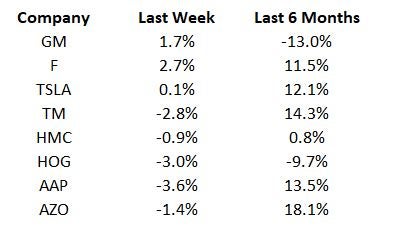 Industry watchers will track China vehicle sales data for September 2021, which is likely to be released by the China Association of Automobile Manufacturers later this week. Investors shall keep a tab on General Motors’ analyst day, to be held on Oct 6. Also, stay tuned for updates on how automakers will tackle the semiconductor shortage and make changes in business operations.