PepsiCo, Inc. (PEP - Free Report) has reported robust third-quarter 2021 results, wherein earnings and revenues beat the Zacks Consensus Estimate and improved year over year. The company continues to benefit from investments in brands, go-to-market systems, supply chains, manufacturing capacity and digital capabilities to build competitive advantages. It also gained from the resilience and strength in its global snacks and foods business as well as growth in the beverage category. It witnessed resilient trends in the North America business, while the international business delivered growth despite uneven recovery across geographies.

Driven by the strong results, the company’s shares gained 1.2% in the pre-market session. Shares of the Zacks Rank #3 (Hold) company have risen 0.7% in the past three months against the industry’s 0.2% fall. 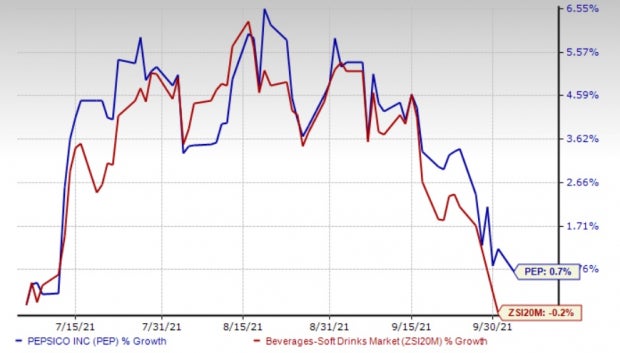 Net revenues of $20,189 million improved 11.6% year over year and surpassed the Zacks Consensus Estimate of $19,441 million. Revenues benefited from volume growth and robust price/mix in the reported quarter. On an organic basis, revenues grew 9% year over year, driven by broad-based growth across categories and geographies. On a two-year basis, organic revenues increased 13.3%. Foreign currency aided revenues by 2% in the third quarter.

Consolidated organic volume was up 4% and price/mix improved 5% in the third quarter. Pricing gains were driven by strong realized prices across all segments. The unit volume was up 4% year over year for the snacks/food business and 8% for the beverage business.

On a segmental basis, the company witnessed revenue growth across all segments. Organic revenues also ascended for all segments.

The company ended the third quarter with cash and cash equivalents of $6,506 million, long-term debt of $37,023 million, and shareholders’ equity (excluding non-controlling interest) of $15,872 million.

The company continues to expect a core effective tax rate of 21%. It expects currency tailwinds to aid its revenues and core earnings per share by 1 percentage point in 2021, based on the current rates.

Bed Bath & Beyond (BBBY) Unveils Studio B, On Track With Plans