Methanex Corporation’s (MEOH - Free Report) shares have popped 56.9% over the past three months. The company has also outperformed its industry’s decline of 5.7% over the same time frame. Moreover, it has topped the S&P 500’s 1.2% decline over the same period. 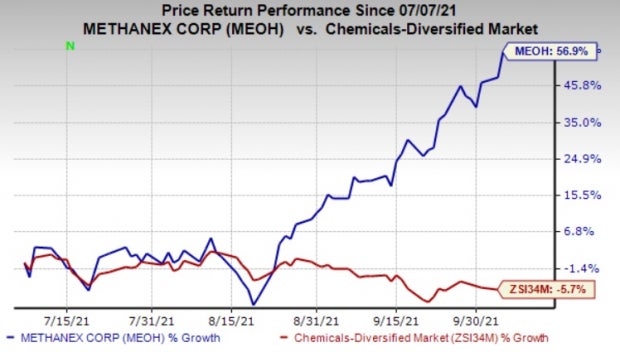 Methanex is gaining from healthy demand for methanol on the back of the ongoing economic recovery. Global methanol demand increased around 3% in the second quarter sequentially, and the company anticipates demand to surpass pre-pandemic level later this year.

The company is also benefiting from an improvement in methanol pricing. Strong methanol demand coupled with ongoing industry supply challenges is driving methanol prices. Higher demand and robust prices led to considerable increases in the top line in the last reported quarter.

Methanex also remains committed to strengthen its balance sheet and maintain its strong liquidity position. It recently announced a new 5% share buyback program. Its strong financial position and a favorable methanol price environment enables it to generate significant cash flow to maintain its business, fund the remaining capital costs for the Geismar 3 project as well as return excess cash to shareholders. The Geismar 3 project is expected to bolster its portfolio and support its future cash generation.

Earnings estimates for Methanex have also been going up over the past two months. The Zacks Consensus Estimate for 2021 has increased 45.6%. The consensus estimate for third-quarter 2021 has also been revised 26.8% upward over the same time frame.

Nucor has a projected earnings growth rate of 537.4% for the current year. The company’s shares have surged around 103% in a year.

Nutrien has an expected earnings growth rate of 177.8% for the current year. The stock has also rallied around 69.1% over a year.

Olin has a projected earnings growth rate of 662.2% for the current year. The company’s shares have shot up around 242% in a year.

Here's Why You Should Invest in AmerisourceBergen (ABC) Stock