Read MoreHide Full Article
American Electric Power Company, Inc. (AEP - Free Report) recently announced that its subsidiary, AEP Energy Partners, has been seeking renewable power purchase agreements (PPA) for 10, 12 or 15 years for solar and wind facilities, and stand-alone Battery Storage System (BESS) projects. These projects, located in the PJM service region, are anticipated to commence operations between 2022 and 2024.
PJM is a regional transmission organization that coordinates the movement of wholesale electricity across 13 States and the district of Columbia.
Benefits of PPA
The aforementioned PPAs will boost the company’s growing retail and wholesale load, and strengthen its renewable portfolio. On being approved, the aforementioned PPAs areexpected to expand American Electric’s customer base, considering PJM’s vast footprint across 13 States, which in turn willdrive the company’s future top-line performance.

With the Utility space rapidly promoting a carbon-free environment, American Electric intends to enhance its renewable asset base significantly.Thus, the company has been working on several projects to attain its carbon neutral target across all business scope. The latest PPAs are a testament to that.
As of Jun 30, 2021, the company had approximately 1,633 megawatts (MWs) of contracted renewable generation projects in service. It is worth mentioning that its subsidiaries have approximately 155 MWs of renewable generation projects under construction.
Interestingly, the company plans to invest $37 billion over the period of 2021-2025, of which 14% will be invested inrenewable energy within and outside its traditional service territory. The massive capital investment will aid American Electric in achieving its long-term earnings growth rate of 5-7%.
In April 2019, American Electric concluded the acquisition of Sempra Renewables, a subsidiary of Sempra Energy (SRE - Free Report) . The buyout included the 724MW of operating wind generation and battery assets for than $1 billion. Such developments along with the latest PPA will further strengthen American Electric’s position in the growing clean energy market.

In August, The AES Corporation (AES - Free Report) announced its plans to construct three utility-scale solar projects in Michigan. The solar plants will collectively generate 104,500 megawatt-hours of electricity that would power 9000 Michigan households.
In June, DTE Energy (DTE - Free Report) announced that it has updated its MI GreenPower voluntary renewables to include more than 2,700 MW of renewable energy by 2023, with enough solar and wind energy capacity to power 900,000 homes in Michigan.

In the past one year, the shares of American Electric have lost 6.3%, compared with the industry’s growth of 1%. 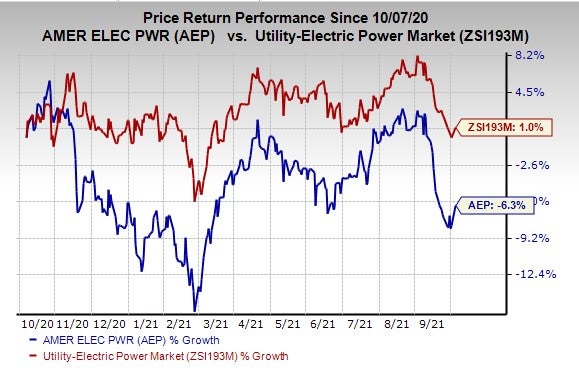