Is Sonic's (SAH) EchoPark Unit the Sole Driver of the Stock?

Sonic Automotive’s (SAH - Free Report) shares have rallied 23.2% over the past three months, outperforming the industry’s growth of 13.4%. The auto sector and S&P 500 declined 0.9% and 1%, respectively, in the same time frame. One of the leading automotive retailers in the United States, Sonic sports a Zacks Rank #1 (Strong Buy) and a VGM Score of A. Amid the rising demand for cars due to preference for personal mobility and economic growth, it looks well poised to maintain its bull run on the bourses. You can see the complete list of today’s Zacks #1 Rank stocks here. 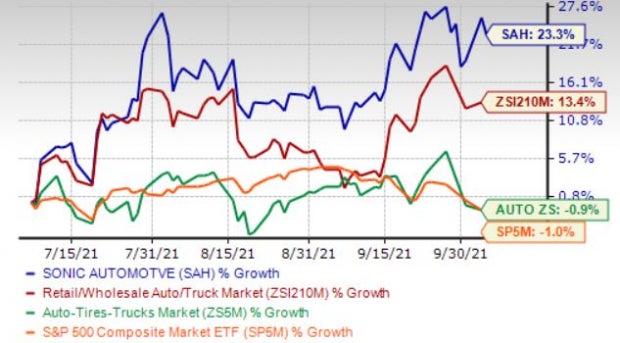 With various auto biggies including General Motors (GM - Free Report) , Ford (F - Free Report) and Volkswagen (VWAGY - Free Report) slashing new vehicle production amid global chip shortage, the used car market has been red hot in the United States. With demand and prices of used cars gaining traction, Sonic’s EchoPark unit has been flourishing. The auto retailer aims to sell between 100,000 and 105,000 units in 2021 via its EchoPark stores. In the last reported quarter, the EchoPark segment recorded revenues of $595.6 million, reflecting an 88.9% uptick from the year-ago figure. Its stores sold 21,261 units, up 61% on a year-over-year basis. The company expects the EchoPark unit to account for 20-25% of total 2021 revenues, indicating an increase from 15% in 2020.

Sonic ended 2020 with 16 EchoPark stores and plans to add 25 EchoPark locations per year from 2021 to 2025. Importantly, it remains committed to selling more than half a million vehicles annually by 2025 via a 140-plus point nationwide distribution network. The company’s focus on expanding the network of stores is set to bolster prospects. Just yesterday, Sonic announced that it has opened a new EchoPark Delivery Center in the New Orleans market, which marks EchoPark's first location in the state of Louisiana and 31st location to date since its launch in 2014.

It should be noted that the company targets $14 billion in annual EchoPark revenues by retailing 575,000 vehicles by 2025, while forging ahead on its target toward a $2-million vehicle annual sales opportunity at maturity.

Not the Only Catalyst

While EchoPark is the key highlight of Sonic’s prospects, its shares are also getting a boost as the company is back in full force to pursue acquisitions for enhancing its brand portfolio and complement overall growth strategy. In an interview with Automotive News in July, Sonic’s president Jeff Dyke stated:

“We've just never been in a position in years to buy franchised stores from a financial perspective, and now we've really shored up our balance sheet. We're in great shape from a liquidity perspective and have plenty of access to capital. There are a lot of stores for sale."

In July, Sonic bolstered its dealership network in Colorado with the purchase of Subaru and Volkswagen franchises. Per Automotive News, these two franchises were Sonic’s first acquisitions since November 2014. Early last month, the company further expanded its dealership footprint in Colorado with the acquisitions of Audi Glenwood Springs and Glenwood Springs Volkswagen. A couple of weeks ago, it created a lot of buzz with the announcement to acquire one of the notable U.S. dealership groups, RFJ Auto Partners, in a deal worth $700 million. The acquisition, which is scheduled for closure in December, seeks to catapult Sonic into the top-five biggest dealership groups (by revenues) in the United States. The deal is expected to add $3.2 billion to Sonic’s annual revenues. This marks a 30% rise in franchised dealership revenues above its prior target of achieving $25 billion in total sales by 2025.

Buy the Stock to Reap Rewards

All in all, Sonic is benefiting from strength in the used-car business and its ability to offer a more digitized selling experience that complements the dealership business. The fact that it is back on buyback mode is also lifting the stock’s prospects. The company’s commitment to actively pursue capital deployment strategies for boosting shareholder value through its dividend and share repurchase programs is also praiseworthy.

Sonic has an impressive earnings surprise history, having surpassed earnings estimates in each of the trailing four quarters. The Zacks Consensus Estimate for 2021 and 2022 sales implies year-over-year growth of 26.5% and 22.5%, respectively. The consensus mark for 2021 earnings per share has been revised 6.6% upward to $7.28, signaling growth of 89.1% from 2020 recorded numbers. Earnings estimates for 2022 indicate another 4.6% growth from 2021 projected levels.