Houlihan Lokey (HLI) Up on Acquisition of 90% Shares of GCA

Houlihan Lokey is expected to acquire GCA’s remaining shares before the end of this year through a second-step transaction.

The buyout has positioned Houlihan Lokey as one of the largest independent investment banking firms by public market capitalization and one of the most geographically diversified firms among global peers.

More than 500 individuals across 24 locations have joined the firm, thereby significantly expanding its presence in Asia and Europe.

Houlihan Lokey’s CEO, Scott Beiser, stated, “This landmark transaction is a truly historic moment for Houlihan Lokey, and we welcome all of our new colleagues to the firm. The addition of GCA significantly expands our technology capabilities, critical to meeting the needs of our clients in an ever more technology-driven world. In addition, the strength of GCA’s platform in Asia-Pacific allows us to achieve scale and better serve clients in this rapidly growing region.”

Scott Adelson, co-president of Houlihan Lokey said, “GCA has proved itself to be a leader in its field, led by an extraordinarily impressive management team. We share a similar business philosophy and a belief in the importance of a strong, client-centric corporate culture. This complementarity is paramount to effectively integrating the two firms, enhancing the services we offer our clients, and maintaining our continued success.”

So far this year, shares of Houlihan Lokey have gained 45.6% compared with 15.7% growth recorded by the industry. 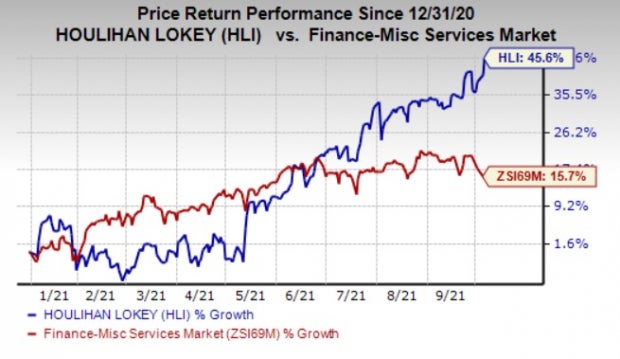