Constellation Brands posted fiscal second-quarter comparable earnings of $2.38 per share, which declined 14% year over year and missed the Zacks Consensus Estimate of $2.78. On a reported basis, the company’s earnings per share was 1 cent, which included Canopy Growth equity losses of 13 cents. Excluding the impact of Canopy Growth, it posted comparable earnings of $2.52 per share, down 13% from the year-ago period.

At the company’s beer business, sales climbed 14% to $1,861.3 million, including an 11.7% increase in shipment volumes and 7.3% depletion volume growth. Sales growth at the segment was driven by robust consumer demand for its     iconic brands. Depletion volume benefited from continued strength in Modelo Especial and Corona Extra.

Depletion volume increased 16% for the Modelo Especial and nearly 5% for Corona Extra. The Modelo Especial became the No. 1 beer brand, thus strengthening its leadership position in the high-end category. It was also the largest share gainer in dollar sales in the U.S. beer category in IRI channels. Meanwhile, Corona Extra was the No. 2 share gainer and No. 3 in the high-end in IRI channels.

Sales in the wine and spirits segment decreased 18% to $509.8 million in the fiscal second quarter. Organic net sales for the segment advanced 15%. Organic net sales were driven by gains from consumer-driven innovation initiatives. Solid performances by The Prisoner Brand Family, Kim Crawford, and Meiomi were key growth drivers.

In the past three months, shares of this Zacks Rank #3 (Hold) company declined 6.1% compared with the industry’s fall of 11.4%. 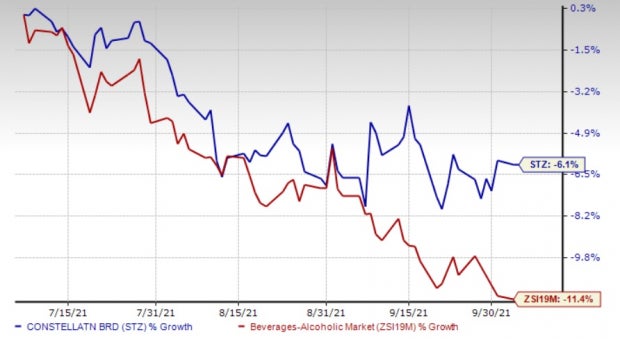 The operating margin in the beer segment contracted 530 bps to 37.2% due to higher cost of goods sold (COGS), marketing investments and SG&A expense, which more than offset gains from favorable pricing, mix and positive currency translations. This was somewhat negated by a rise in marketing spend and a higher cost of goods sold. Increased COGS primarily stemmed from obsolescence of $66 million associated with excess inventory of hard seltzers, due to a slowdown in the overall category in the United States.

The wine and spirits segment’s operating margin contracted 620 bps to 19.7% on the bulk sales of smoke-tainted wine, which was margin-dilutive, and higher SG&A and marketing expenses and increased COGS. This was partly offset by gains from improved mix stemming from the existing portfolio and divestitures.

Constellation Brands ended the fiscal second quarter with cash and cash equivalent of $103.4 million. As of Aug 31, 2021, it had $10,081.7 million in long-term debt (excluding current maturities) along with total shareholders’ equity (excluding non-controlling interest) of $11,192.7 million.

On Oct 5, 2021, the company announced a quarterly dividend of 76 cents per share for Class A stock and 69 cents for Class B stock. The dividend is payable on Nov 19 to its shareholders of record as of Nov 5.

Constellation Brands expects to generate an operating cash flow of $2.4-$2.6 billion for fiscal 2022, while free cash flow is estimated to be $1.4-$1.5 billion. The company plans to incur capital expenditure of $1-$1.1 billion in fiscal 2022, excluding $900 targeted for the Mexican beer operations’ expansion activities.