This move comes after the company revealed plans to expand the distribution of Topo Chico Hard Seltzer nationwide from January 2022. The product was initially launched in nine states and seven metro areas across the United States. Driven by positive customer response, the company, in partnership with Coca-Cola (KO - Free Report) , intends to distribute it in all 50 U.S. states.

Molson Coors has been benefiting from strong growth of hard seltzers in the United States. The company is on track with its hard seltzer ambition, which is a key part of the “beyond beer” approach. Its share in the U.S. hard seltzer segment doubled in second-quarter 2021.

The Vizzy brand gained almost a full-point share in the United States in the second quarter, driven by the launch of the new Lemonade variety pack. The company also launched the Vizzy Watermelon pack, which has been a hit with retailers. Outside the United States, the Canadian hard seltzer portfolio is performing well with the Vizzy and Chris Hard Seltzer. In Europe, it is witnessing strong growth for Three Fold in the U.K., and Wai Moment in Central and Eastern Europe.

Apart from the seltzer portfolio, the company is on track with expansion into various other lines. Truss — its Canadian cannabis joint venture – is holding strong as a market leader in the entire Canadian cannabis beverage market. It is also positioned to benefit from its planned line-up of CBD beverages in the United States through the Truss USA. Also, the Blue Moon LightSky beer has attained the top-volume share gainer rank in the U.S. craft segment.

Molson Coors has also entered the fast-growing RTD cocktails space with an exclusive equity and distribution agreement with Superbird, and above-premium tequila-based Paloma. The company expects to deliver significant growth through the entire lineup of hemp-derived CBD beverages and the fast-growing RTD cocktails. This is likely to drive its emerging drug division to become a $1-billion business in revenue terms, by 2023.

Molson Coors is progressing well with the revitalization plan that aims at achieving sustainable top-line growth by streamlining the organization and reinvesting resources into its brands and capabilities. The company intends to invest in iconic brands and growth opportunities in the above-premium beer space; expand in adjacencies and beyond beer, and create digital competencies for commercial functions, supply-chain-related system capabilities, and employees.

Management, on its last earnings call, expected 2021 to be a year of top-line growth and business investments. Its guidance also assumes persistent strength in the above-premium portfolio, particularly hard seltzer. The company anticipated net sales to grow in mid-single digits at constant currency in 2021.

Shares of this Zacks Rank #4 (Sell) company have gained 7.5% year to date against the industry’s 3.8% decline. 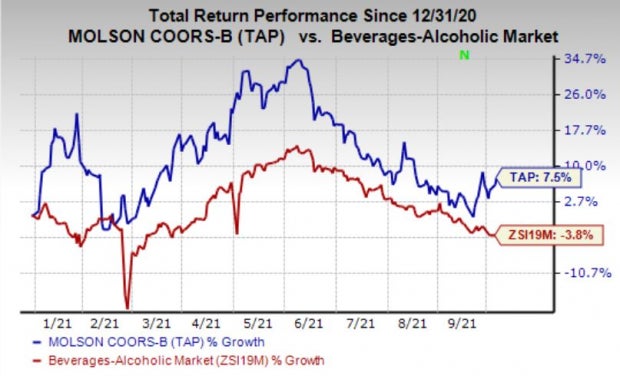 Delta (DAL) to Report Q3 Earnings: What's in the Offing?