Here's Why You Should Invest in Celanese (CE) Stock Now

Celanese Corporation’s (CE - Free Report) shares have popped around 23% year to date. It is gaining from its productivity measures, investments in organic projects and strategic acquisitions. We are positive on the company’s prospects and believe that the time is right for you to add the stock to portfolio as it looks promising and is poised to carry the momentum ahead.

Let’s take a look into the factors that make this leading chemical and specialty materials maker an intriguing choice for investors right now. 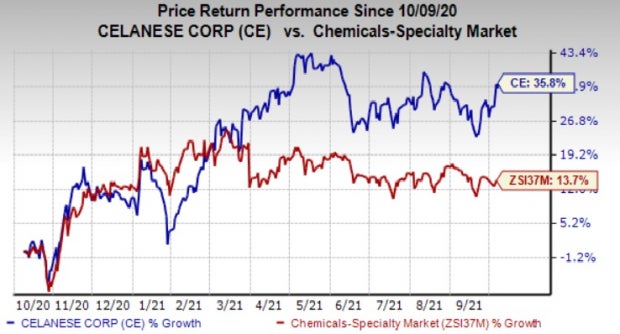 Over the past three months, the Zacks Consensus Estimate for Celanese for the current year has increased around 24.8%. The consensus estimate for third-quarter 2021 has also been revised 47.5% upward over the same time frame. The favorable estimate revisions instill investor confidence in the stock.

Celanese has outpaced the Zacks Consensus Estimate in each of the trailing four quarters. In this time frame, it has delivered an earnings surprise of 15.9%, on average.

ROE is a measure of a company’s efficiency in utilizing shareholder’s funds. ROE for the trailing 12-months for Celanese is 38.6%, above the industry’s level of 13.4%.

Celanese is benefiting from its productivity actions, investments in high-return organic projects and synergies of acquisitions. The company is also gaining from improving demand in most of its end markets.

The company also continues to actively pursue acquisitions, which are providing it opportunities for additional growth, investment and synergies. The acquisitions of SO.F.TER., Nilit and Omni Plastics are expected to contribute to earnings expansion in the company's Engineered Materials segment. The Elotex acquisition also strengthened the company’s position in the vinyl acetate ethylene emulsions space. The buyout is expected to contribute to volumes in the Acetyl Chain segment. The recently-announced purchase of Exxon Mobil's Santoprene Business will broaden the company’s portfolio of engineered solutions.

The company also continues to generate strong cash flows and is focused on boosting shareholders’ value. It returned $326 million to shareholders through dividend payouts and share repurchases during second-quarter 2021. It completed $500 million in share buybacks in first-half 2021 and expects to repurchase another $500 million in the second half.

Nucor has a projected earnings growth rate of 537.4% for the current year. The company’s shares have surged around 103% in a year.

Nutrien has an expected earnings growth rate of 178.3% for the current year. The stock has also rallied around 69% over a year.

Olin has a projected earnings growth rate of 662.2% for the current year. The company’s shares have shot up around 223% in a year.