The divestment involves eight of the partnership’s oil storage terminals, of which seven are located on the East Coast and one in Florida. The facilities have a storage capacity of 14.8 million barrels. This represents about a fifth of NuStar’s overall storage space throughout its network, which covers the United States as well as facilities in Mexico and Canada.

NuStar’s network of storage facilities is focused in Texas and the Midwest. Although the terminals are substantial assets with strong operations, the partnership decided to divest the eight terminals as these no longer complement its pipeline and storage business, and fit into its long-term plans.

Motor fuel distributor Sunoco possesses assets in New York Harbor and the Southeast United States, which will provide synergistic opportunities to ensure further achievements of the divested facilities. Henceforth, the best alternative for further development of the facilities and NuStar is to be owned by some other entities, which can utilize the terminals’ capabilities.

As the demand for oil and gas was approaching its end amid the pandemic, so did the space to hold the world’s oil. NuStar is currently left with 64 storage facilities in North America. In December 2020, the partnership divested two storage terminals in Texas City, with a capacity of 3 million barrels.

NuStar intends to use the proceeds from the latest divestment to reduce debt. The partnership expects to spend $140-$160 million as strategic capital in 2021, which will be funded by its internally generated cash flows. Moreover, NuStar expects to spend $35-$45 million as reliability capital for the year.

Headquartered in San Antonio, TX, NuStar is a midstream energy service provider. It engages in the transportation and storage of crude oil as well as refined products.

Shares of the partnership have underperformed the industry in the past three months. Its stock has lost 6% against the industry’s 7.6% growth. 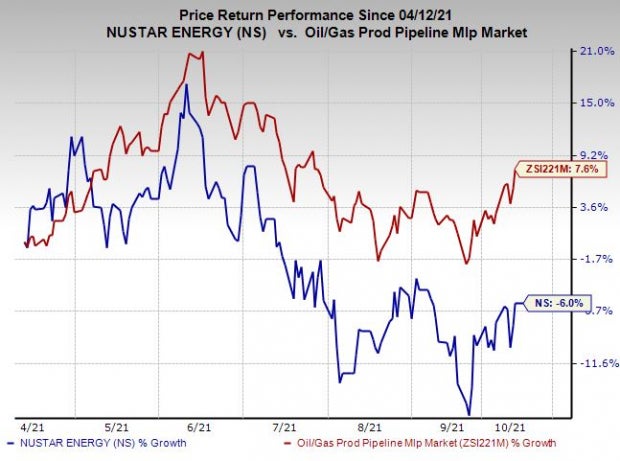 Eni’s earnings for 2021 are expected to increase 23% year over year.

ConocoPhillips’s earnings for 2021 are anticipated to rise 19.1% year over year.