As per the preliminary report, third-quarter 2021 revenues are estimated to be in the range of $505-$510 million on a reported basis, up by around 6-7% from the year-ago quarter. The Zacks Consensus Estimate of $181.2 million remains below the preliminary figure.

The company’s COVID-19 revenues for the quarter are expected to be approximately $406 million, up by 8.1% from the year-ago quarter. Quidel also confirmed shipping more than 45 million SARS tests during the third quarter, reflecting an increase of 135% year over year.

Per the company, the strong revenue uptick in the third quarter resulted from a significant surge in demand throughout multiple markets for its SARS-related products on the back of continued rise in infections due to the spread of the highly contagious Delta variant.

Following this release, shares of the company are up 2.1% till the last trading.

Quidel has been observing a robust adoption of its products over the past few months, which has driven up shipments of its SARS tests. The company, in early September, announced that it will soon make its non-prescription QuickVue At-Home OTC COVID-19 Test available to consumers. The test will be available at more than 7,000 CVS Health Corporation’s (CVS - Free Report) pharmacy locations across the United States as well as online at cvs.com. In May, Quidel announced that its non-prescription QuickVue At-Home OTC COVID-19 Test will be available in the United States to consumers for online order through e-commerce retailer Amazon. These measures are likely to have driven the company’s robust sales of its SARS-related products during the third quarter.

Further, Quidel received the CE Mark for its Savanna multiplex molecular analyzer and Savanna RVP4 Assay (Respiratory Viral Panel-4) in July. This allows Quidel to market and sell the Savanna system in Europe as well as in countries that accept the CE Mark. In June, the company received an amended Emergency Use Authorization from the FDA, which allowed it to market Sofia Q, its latest addition to the Sofia and Sofia 2 line of Fluorescent Immunoassay Analyzers (“FIA”). Quidel, in May, received Health Canada’s authorization for its Sofia SARS Antigen FIA, to be used for serial testing in the detection of active coronavirus infection in both symptomatic and asymptomatic populations. The slew of regulatory approvals is expected to have significantly contributed to the company’s third-quarter revenues.

Although the company’s preliminary projection of a robust improvement in revenues lifts our confidence, management’s fear of the unstable SARS testing environment raises our apprehension. 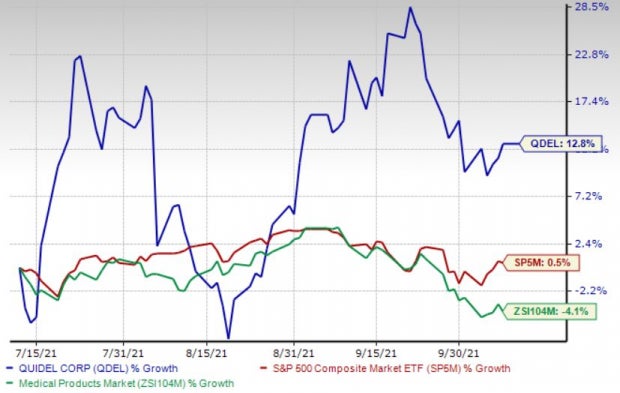 What's in the Cards for BlackRock (BLK) in Q3 Earnings?