Last week, General Motors (GM - Free Report) created the maximum buzz in the auto space with its investor-day event, wherein the company laid out ambitious financial targets. General Motors believes that its compelling hardware and software platforms, electrification strides as well as aggressive autonomous vehicle development will result in major revenue growth by the end of the decade. The automaker aims to double five-year average annual revenues of $140 billion by 2030, with software and new businesses witnessing a CAGR of 50% through the decade-end. To that end, the company expects $80 billion in new revenues from software-enabled services, Cruise unit, BrightDrop business and OnStar insurance line. (Is GM a 'Buy' After Setting Ambitious Growth Targets?)

Meanwhile, as the global chip crunch continues, some companies have been prompted to slash guidance for the to-be-reported quarter. For instance, last week, automotive equipment giant Oshkosh Corporation (OSK - Free Report) and trucking giant PACCAR (PCAR - Free Report) issued dim business updates. Oshkosh expects supply-chain disruptions, and high commodity and freight costs to impact fourth-quarter fiscal 2021 results. A tough labor market and shortage of parts have made it difficult for the firm to manufacture and ship units, which particularly impacted its Access Equipment segment. As a result, Oshkosh anticipates fourth-quarter 2021 revenues and EPS to be lower than the prior expectations. It envisions fourth-quarter revenues and adjusted EPS of $2.05 billion and 90-95 cents, respectively. PACCAR updated that its third-quarter truck deliveries were affected by the global shortage of semiconductor supply. It expects deliveries of 33,000 vehicles, indicating a decline from 40,100 units sold in second-quarter 2021. The company expects chip crunch and related production inefficiencies to persist in the fourth quarter as well.

Recap of Week’s Other Important News

Ford (F - Free Report) released September 2021 sales figures for the United States — the company’s most significant market. During September, the auto giant sold 156,614 vehicles in the United States, marking a 17.7% drop from September 2020 but an improvement over July's 120,053 and August's 124,176 units. Ford's retail sales declined 20.8% year over year for the month. Ford’s namesake brand’s vehicle sales for September dipped 17.5% to 148,967 units. The Lincoln brand vehicle sales also fell 20.9% year over year to 7,647 units. Despite such broad sales declines, there were a few bright spots for the auto biggie. New products and improved inventory backed Ford to be the top-selling automaker in September, with retail sales up 34.3%, sequentially.

Veoneer (VNE - Free Report) was acquired by Qualcomm for $4.5 billion, as the latter knocked out Magna with a higher bid, putting an end to the bidding war brewing between the chipmaker and the car supplier for the control of the Swedish automotive-technology company. Per the deal, Qualcomm partnered with New York-based SSW Partners to acquire Veoneer in an all-cash transaction for $37 per share, reflecting an 18% premium over Magna’s bid made in July. The boards of both Veoneer and Qualcomm have approved the transaction and the deal is expected to close next year. Meanwhile, Veoneer will pay Magna a termination fee of $110 million.

Group 1 Automotive (GPI - Free Report) announced the acquisition of Classic Chrysler Dodge Jeep Ram of Denton and Classic Mazda of Denton, located within the greater Dallas-Fort Worth metro area of Texas. The company expects the stores to generate annual revenues to the tune of $150 million. It currently operates 10 dealerships, representing 10 brands in the Dallas-Fort Worth market. Group 1 is thrilled to bolster its presence in the fast-growing market. The company has generated $570 million in acquired revenues on a year-to-date basis. With the new acquisition, Group 1’s total U.S. dealership count stands at 119.

AutoZone (AZO - Free Report) authorized additional buyback worth $1.5 billion to the ongoing share repurchase program. In fiscal 2021, the firm repurchased $3.4 billion of stock. At the end of the last reported quarter, AutoZone had shares worth $417.6 remaining in the existing repurchase authorization. The company’s latest move to raise the share buyback program indicates Autozone’s commitment toward delivering long-term shareholder value, and reflects confidence in its financial position and ability to generate sufficient cash flows. It is to be noted that AutoZone has authorized $27.65 billion in share repurchases since 1998.

Geely Automobile (GELYY - Free Report) -owned Volvo Cars recently issued a recall for 460,769 older model cars worldwide over defective driver-side air bags. According to the National Highway Traffic Safety Association, the recall includes 259,383 vehicles sold in the United States, 7,048 in Canada and 2,475 in Mexico. The recalled vehicles are the S80 sedan from the 2001 to 2006 model years, and the S60 sedan from the 2001 to 2009 model years. In a separate development, Volvo announced plans to raise at least $2.9 billion in Sweden’s biggest initial public offering in decades and expects to debut on the Nasdaq Stockholm before the end of this year.

CarMax (KMX - Free Report) exited the new-vehicle retail business with the sale of the CarMax Kenosha Toyota new-car dealership to the Rydell Company. The decision to divest its new-car dealership franchise was made by the used-vehicle retailer to enable it to continue focusing on its core business of delivering an exceptional used-car buying and selling experience. With the divestiture of the last Toyota store, CarMax has now completely disposed off the new-car business.

Thor Industries (THO - Free Report) approved a 5% hike in quarterly dividend payment. The dividend has been raised from 41 cents per share to 43 cents and will be payable on Nov 5, 2021, to shareholders of record as of Oct 22, 2021. It should be noted that the recreational vehicle maker is committed to enhancing shareholder value and has raised regular dividend for 12 straight years. Thor currently sports a Zacks Rank #1 (Strong Buy). You can see the complete list of today’s Zacks #1 Rank stocks here. 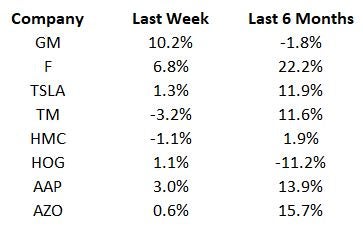 Industry watchers will track China vehicle sales data for September 2021, which is likely to be released by the China Association of Automobile Manufacturers soon. Also, stay tuned for updates on how automakers will tackle the semiconductor shortage and make changes in business operations.