Valued at $47.2 million, this contract is scheduled to be completed by Sep 30, 2023. Work related to this deal will be carried out in Orlando, FL.

In the recent times, increasing geopolitical tensions across the globe have induced many nations to expand their military arsenal, with missiles constituting a significant part of that. Lockheed Martin is one of the major missile makers in the United States. It stands out among its peers by virtue of its diverse programs and strong order bookings for different variants of missiles.

It is imperative to mention here that in 2018, Lockheed chose Honeywell (HON - Free Report) to supply its control actuation system (CAS) for Lockheed’s Guided Multiple Launch Rocket System Extended Range under a multi-year contract. The CAS-enabled Lockheed to effectively control and steer the path of its advanced missile system in the battlefield despite growing distances, thereby eliminating mission-critical targets with less collateral damage.

No doubt this addition made Lockheed’s missile systems even more attractive to the U.S. Army and hence its MFC unit has been consistently experiencing a large flow of contracts from the Pentagon involving its missiles and other associated parts like control actuation systems. The latest deal won by the company is a bright example of that.

Such contract wins should boost the MFC unit’s top-line performance in future quarters.  Notably, the unit’s revenues increased 5% year over year in the second quarter of 2021.

Per Mordor Intelligence research firm, the global missile and missile defense market is projected to register a CAGR of more than 10% during the 2020-2025 period. With North America expected to continue to lead this market, such growth projections will certainly benefit U.S. missile makers, including Lockheed Martin, Raytheon Technologies (RTX - Free Report) and Northrop Grumman (NOC - Free Report) in the future.

Shares of Lockheed Martin have declined 8.8% in the past six months compared with the industry’s decline of 20.1%. 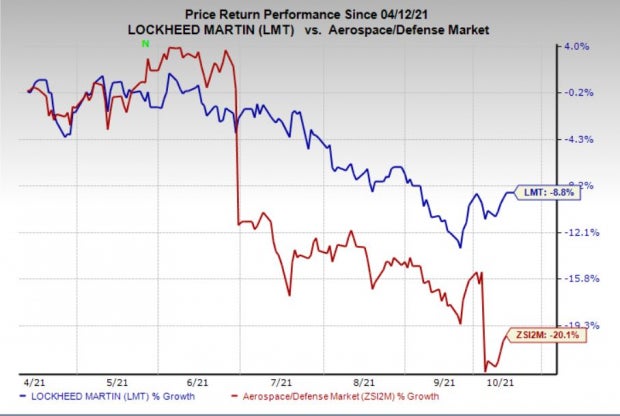 Here's Why You Should Retain DENTSPLY SIRONA (XRAY) Now