Read MoreHide Full Article
L3Harris Technologies, Inc. (LHX - Free Report) recently secured a 10-year contract from the U.S. Air Force involving the upgradation of Boeing’s (BA) B-52 Aircraft. As part of the deal, L3Harris will modernize and enhance the B-52 aircraft with a proven electronic warfare system that can protect the aircrew from enemy radar threats.

Valued at more than $947 million, the contract entails L3Harris to modernize the AN/ALQ-172 electronic warfare (EW) self-protection system deployed in B-52 jets with enhanced integrated radio frequency system. This would enable military aircrew to simultaneously counter multiple electronic spectrum threats that interfere with aircraft operations.
The contract enables L3Harris to extend its services in modernizing the aircraft, which includes software sustainment to hardware upgrades.

Intense geo-political tensions globally have resulted in countries strengthening their defense system. In this context, a good electronic warfare system plays a vital role in adefense system as it highlights the ability to use the electromagnetic spectrum effectively. Countries are increasing their expenditure on improved and effective electronic warfare systems in order to defend themselves from radar threats, and ensure better security within the military services.
In this context, it is imperative to mention that L3Harris’s AN/ALQ-172 EW self-protection system can simultaneously counter multiple pulse, continuous wave, pulse Doppler and monopulse threats. It is integrated with the aircraft controls and displays and defensive subsystem to provide the aircrew protection against the most sophisticated radar-directed threats.
Such enhanced features made the L3Haris’s EW self-protection system anideal choice for the U.S Air Force for its B-52 bomber aircraft. The latest deal is a testament to that.

In the past year, shares of L3Harris have gained 33.2% compared with the industry’s growth of 9.5%. 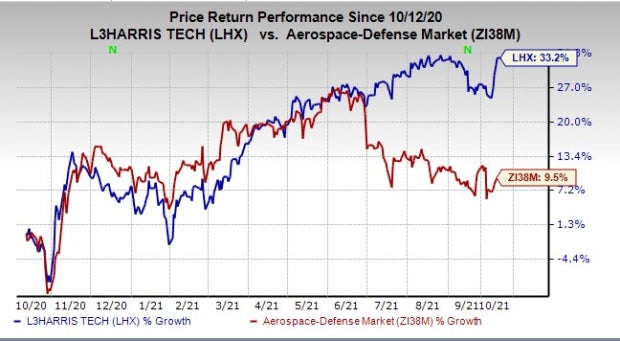