The electric vehicle (EV) revolution is speeding up, with companies leaving no stone unturned to establish a strong foothold in this domain. Legacy automakers are stepping up e-mobility investments and setting ambitious targets to electrify their fleet. To this end, U.S. auto giant General Motors (GM - Free Report) hogged the maximum limelight last week with the announcement of various strategic agreements to step up its e-mobility game.

It entered into a strategic agreement with Wolfspeed to develop and supply silicon carbide power device solutions for the automaker’s future EV programs. The automaker also signed a non-binding memorandum of understanding with GE Renewable Energy to evaluate the opportunities for enhancing supplies of heavy and light rare earth materials as well as magnets. A secure, sustainable and resilient local supply chain for EV materials is the key to achieving General Motors’ vision of an all-electric future. (General Motors Strikes Deals With Wolfspeed and GE)

General Motors also set the stage for battery tech innovation with the announcement of establishing a new research facility in Michigan. The facility — named Wallace Battery Innovation Center — will help the U.S. auto giant to speed up the manufacture, and commercialization of long-range and more affordable EVs. The capability to build large-format, prototype lithium-metal battery cells would be the main attraction of the new facility. Also, it is expected to manufacture batteries with energy density within 600-1200 watt-hours per liter. That translates to a range of around 500-600 miles on a single recharge, up from 400 miles initially claimed by the company for its Ultium battery architecture. (General Motors' New Battery Lab to Step Up EV Strides)

In the Investor Day event held last week, General Motors stated that it projects annual EV revenues to scale from $10 billion in 2023 to $90 billion by the decade-end. The firm’s own modular battery platform, the Ultium Drive system, will aid in the transition to an all-electric portfolio down the road. The array of Ultium-powered EVs will include popular models, including a $30,000 Chevrolet crossover, Buick crossovers, Chevrolet trucks, GMC Hummer EV and Cadillac Lyriq crossover EV. The company will also offer an electric version of GMC’s Sierra pickup truck.

Other Key Stories of the Week

1.Tesla (TSLA - Free Report) increased the price of both the Model 3 Standard Range Plus and Performance. The price of the base rear-wheel drive Model 3 Standard Range Plus is hiked to $41,990 from $39,990. The starting price of the Model 3 Performance has also been increased from $56,990 to $57,990, while the price of the Model 3 Long Range remains unaltered at $49,990. The Model Y Long Range got a price bump from $52,990 to $54,990. The higher-level Model Y Performance is now priced at $61,990 compared with the earlier price of $60,990. Meanwhile, at its annual shareholder meeting on Oct 7, Tesla CEO Elon Musk announced the decision to shift the company’s headquarters to Austin, TX from Palo Alto, CA. (Tesla Raises Model 3 & Y Prices, Moves Headquarters to Texas)

2. BYD Co., Ltd. (BYDDY - Free Report) joined forces with Levo Mobility — a joint venture between vehicle-to-grid (V2G) specialist Nuvve, and capital investors Stonepeak and Evolve — for the deployment of 5000 electrified fleets in the United States over the next five years. The alliance seeks to integrate Nuvve’s V2G proprietary technology into a variety of BYD’s vehicle mix including transit buses and coaches, last-mile delivery vehicles, school buses, tractors as well as refuse trucks. Nuvve would also offer related charging infrastructure, and energy maintenance and other services to customers with no upfront costs. Levo plans to purchase up to 5,000 medium and heavy-duty V2G-enabled electric vehicles via a preferred financing partnership with BYD. (BYD & Levo Tie Up for Electrification of U.S. Fleets)

3. Allison Transmission (ALSN - Free Report) is ramping up the development of its electrification technology for integration into the U.S. Army’s ground combat vehicle fleet, which includes tracked Infantry Fighting Vehicles and the Main Battle Tank. Allison will be working on an end-to-end development of a motor/generator and inverter system to be attached to a tracked vehicle transmission in coordination with the Army’s Ground Vehicle Systems Center. Allison’s portfolio of defense electrification also offers the Transmission Integral Generator, which has been developed jointly with Leonardo DRS and has qualified in the stringent testing procedures of the Ground Vehicle Systems Center. (Allison to Offer E-Transmission Solutions to US Army Fleet)

4. Nikola (NKLA - Free Report) inked a deal with TC Energy for the construction and operation of large-scale hydrogen production centers in the United States and Canada. The collaboration is aimed at creating the infrastructure necessary to supply low-cost, low-carbon hydrogen at volume. Also, both the firms intend to build hubs in major geographic regions to expedite the adoption of heavy-duty zero-emission fuel cell electric vehicles (FCEVs) and hydrogen throughout industrial segments. The primary goal of the partnership is to build hubs capable of generating more than 150 tons of hydrogen daily across heavily trafficked truck corridors in order to meet Nikola's anticipated requirement of hydrogen to fuel Class 8 FCEVs over the next five years.

5. Stellantis (STLA - Free Report) announced plans to invest $229 million in three plants in Indiana in order to accelerate the development of EVs. The investment will revamp three Kokomo plants in Indiana to produce electrified, eight-speed transmissions and retain 662 jobs. The next-generation transmissions can be integrated into internal combustion, mild hybrid or plug-in hybrid vehicles. This is in sync with the automaker's strategy of producing a mix of traditional combustion engine vehicles, hybrid vehicles and all-electric vehicles in a quest to attain 40% low-emission vehicle sales in the United States by 2030. In another development, Stellantis’ Alfa Romeo intends to roll out a new model each year until 2026, starting with the Tonale SUV next year. Further, starting from 2027, all Alfa Romeo new vehicles would be electric vehicles. 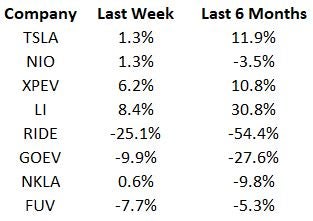 In the past six months, all stocks have decreased, apart from Tesla, XPeng and Li Auto. Lordstown bore the maximum brunt, with shares declining 54.4%. The past week also displayed a mixed price trend, with Lordstown Motors being the worst performer and Li Auto registering the maximum gains.