The contract is valued at $15.7 million. The majority of the work related to this deal will be carried out in Ridley Park, PA.

Military rotorcrafts like Boeing’s MH-47G have been gaining popularity with comprehensive mission parameters, thanks to the integration of advanced and multiple capabilities installed in them. MH-47 belongs to the aerospace giant’s combat-proven CH-47 Chinook family of helicopters.

Besides the U.S. Army, this family of heavy-lift helicopters is being deployed by major military teams across the globe, courtesy of its combat-proven expertise to perform complex and tactical missions, which include air transportation of troops, weapons, and internal and external cargo. Its growth on a global scale is evident as nations such as the United Kingdom, The Netherlands, Spain, Australia, Japan, South Korea, the United Arab Emirates and others use this multi-mission aircraft.

More than 950 Chinooks are currently in service in 20 countries, reflecting the solid demand enjoyed by this family of helicopters, with the aforementioned contract being a bright example of the same.

A rapid increase in terror attacks has compelled nations to strengthen their arsenal and bump up defense budgets. With the United States being home to some of the largest manufacturers of combat jets, the nation’s prime defense contractors enjoy a steady flow of contracts from both Pentagon and its foreign allies. With military jets and helicopters constituting a major portion of a nation’s armaments, there is a steady flow of contracts for these weaponries. The latest contract win by Boeing bears a testament to this.

Per a report by the Mordor Intelligence firm, the global military rotorcraft market is expected to witness a CAGR of 3% during the 2020-2025 period.

Notably, Airbus is one of the world's largest suppliers of advanced military helicopters. Some of the significant helicopters manufactured by Airbus are H125M, H135M and H145M.

Lockheed’s Sikorsky division is a well-known manufacturer of combat-proven military helicopters like BlackHawk, CH-53K, MH-60R and many more.

Textron’s Bell unit is a renowned manufacturer of military helicopters like AH-1Z, UH-1Y, V-22 and a few more.

Shares of Boeing have gained 35.3% in the past year against the industry’s decline of 10.4%. 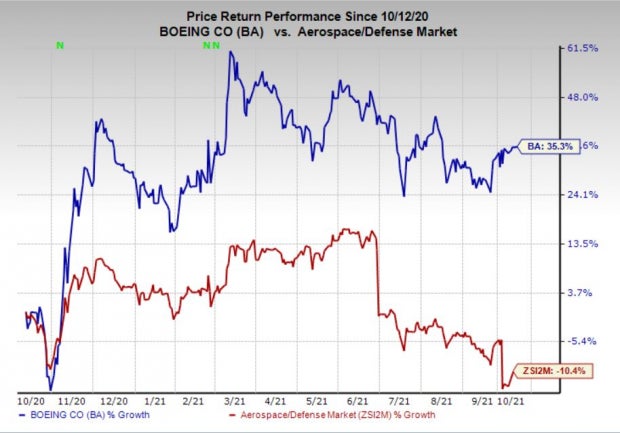