Valued at $80 million, the contract is expected to get completed by October 2022. Per the terms, Lockheed will offer LCS class design services and integrated data and product model environment support.

The majority of the work related to the deal will be carried out in Hampton, VA and Moorsetown, NJ.

The LCS is a fast, highly maneuverable, networked surface combat ship, which is a specialized variant of the family of U.S. future surface combat ships, known as DD(X). The LCS is equipped to operate in the coastal waters and can counter growing potential threats from coastal mines, quiet diesel submarines and others. The LCS can serve surface, anti-submarine and mine countermeasure missions.

The fiscal 2022 defense budget outlines a spending plan of $34.6 billion for shipbuilding, reflecting a 7.1% increase from the prior fiscal’s tally. Such expansionary budgetary allocations should enable Lockheed Martin to procure more significant contracts related to combat ships like the latest one in the future.

Looking ahead, per Technavio, the global shipbuilding market is expected to witness a CAGR of 2.7% over the 2021-2025 period to reach $13.24 billion. This, in turn, should potentially boost the demand for various assault ships, including the LCS combat ships. Such projections are expected to benefit Lockheed Martin, going forward.

Other Defense Majors to Benefit

Huntington Ingalls is known for specializing in manufacturing amphibious assault and expeditionary ships and provides more than 70% of ships to the U.S. Navy. Likewise, General Dynamics' National Steel and Shipbuilding Company (NASSCO) has an extensive history of designing, building and repairing ships for the U.S. government and commercial customers.

Bae Systems PLC is also poised to benefit as it specializes in providing maintenance and modernization programs to support ships and equipment in service across the globe.

In the past year, Lockheed Martin’s shares have lost 8.2% compared with the industry’s 9.4% decline. 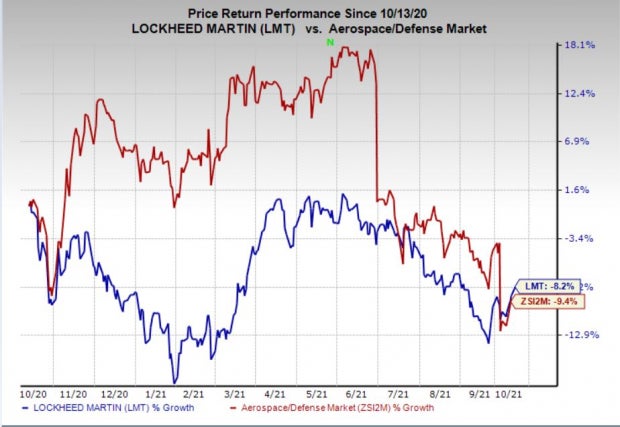 Scientific Games (SGMS) Up on Contract Wins and Acquisitions