The Boeing Company (BA - Free Report) recently reported delivery figures of its commercial and defense operations for the third quarter of 2021. The figures reflect a massive improvement of 203.6% in commercial shipments from the previous year’s tally while defense shipments remained unchanged year over year.

Combining both segments, Boeing’s total deliveries in the third quarter were 122 units compared with 65 units delivered in the year-ago period.

Boeing reported commercial deliveries of 85 airplanes in third-quarter 2021, which increased significantly from the prior-year tally of 28, primarily driven by solid 737 deliveries and to some extent, improved deliveries for 767 jets.

However, the aerospace giant delivered none of its 787 Dreamliner jets in the third quarter of 2021 compared with the 13 jets it supplied in the last year’s September quarter.

Ever since Boeing’s 737 Max got the flight approval from the Federal Aviation Administration (FAA) last November, the jet major has ramped up its delivery rate for the same.

Moreover, with the air traffic statistics having improved over the past few months, led by a smooth rollout of the coronavirus vaccines, the airlines got encouragement to hike their flight routes, thereby boosting their delivery intake rates as well.

However, quality flaws in 787 Dreamliner caused a temporary halt in the delivery flow of this product line during the third quarter. Until the FAA approves Boeing's proposals for inspecting the 787 fleet with a view to ensure that the quality issues on each jet are fixed, there will be no deliveries for the Dreamliner jets.

It is imperative to mention in this context that Boeing’s arch rival Airbus SE (EADSY - Free Report) delivered a total of 127 commercial aircraft in the third quarter of 2021.

Considering the 85 commercial aircraft deliveries made by Boeing, the European aircraft giant remained quite a step ahead in terms of commercial deliveries during the third quarter.

A Brief Look at Defense Deliveries

In its defense and space business, Boeing’s deliveries totaled 37 in third-quarter 2021, which came in line with the prior-year period’s tally.

We now wait to see how other prominent combat jet manufacturers like Lockheed Martin (LMT - Free Report) and Embraer (ERJ - Free Report) report their delivery numbers for the third quarter.

Boeing’s share price has gained 36.9% in the past year against the industry’s decline of 9.4%. 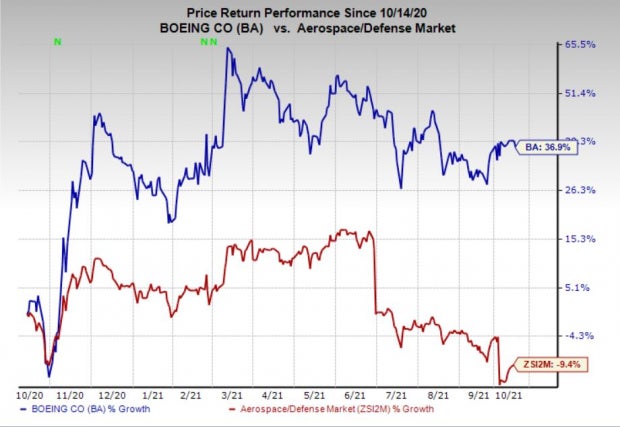