ElectraMeccanica (SOLO - Free Report) inked a deal with Bosch to build a service network of independent auto repair shops to support service and maintenance operations for the EV maker’s flagship SOLO model. The company began the first commercial deliveries of single-seat SOLO EV early this month. With deliveries to reservation holders and fleet owners expected to increase, the partnership with Bosch for service and repair of the vehicles comes at the right time. The Bosch Car Service Network will be initially established in the western United States and gradually expand through the rest of the nation.

Nikola (NKLA - Free Report) collaborated with international multi-service flatbed transportation firm PGT Trucking. The alliance includes a letter of intent from PG Trucking to lease 100 Nikola Tre heavy-duty FCEVs post the completion of the Nikola Tre FCEV demonstration program. Deliveries of the FCEVs to PG Trucking are expected to commence in 2023 after production begins at Nikola’s Arizona manufacturing plant. The deal will enable PG Trucking to offer advanced transport solutions, as it intends to reduce its carbon footprint.

Arcimoto (FUV - Free Report) released third-quarter 2021 stakeholder update. The company notified that it produced 78 vehicles in the quarter under discussion, reflecting a decline from 85 vehicles manufactured in the second quarter amid the global chip crisis. The final production figures will be unveiled in its third-quarter SEC filings. Meanwhile, sales hit a record of 64 units, more than doubling from the last reported quarter. The EV maker also announced the launch of its marketing trip, the Ride Of The Arconauts, which kicked off on Oct 16, to spread awareness of the latest and exciting EV models.

Honda announced plans to sell only electrified vehicles in China beginning 2030. The auto giant will no longer introduce any fossil-fuel vehicles and electrify all upcoming models. In 2022, the firm will launch a new electric vehicle brand in China called e:N Series. Under this brand, Honda will roll out 10 new EVs in five years in collaboration with its partners GAC and Dongfeng Motor. The first set of e:N Series models, e:NS1and e:NP1, will hit the roads in spring 2022. New EV production plants are set to be established at both GAC Honda and Dongfeng Honda, with the commencement of production expected in 2024.

Cummins (CMI - Free Report) announced a 15-liter natural gas engine for heavy-duty trucks, in sync with its aim of reducing greenhouse gas emissions. The expanding product lineup focusing on greener solutions will enable the company to achieve PLANET 2050 environmental goals, per which, Cummins aims to reduce emissions from new products by 30% by 2030 and attain carbon neutrality by 2050. 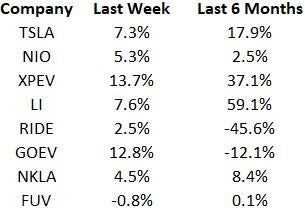 Stay tuned for announcements of upcoming EV models and any important updates from the red-hot industry. Also, investors are keenly awaiting third-quarter earnings of Tesla, which is slated to report on Oct 20, after the closing bell.

QIAGEN (QGEN) to Report Q3 Earnings: What's in the Cards?