W&T Offshore, Inc. (WTI - Free Report) recently provided a third-quarter operational update, which incorporated the effects of Hurricane Ida. It plans to report third-quarter results on Nov 2, after the market closes. Let’s see how the company has fared in the September quarter and which way estimates are headed.

W&T Offshore’s third-quarter production volumes are expected in the range of 34,200-35,100 barrels of oil equivalent per day (Boe/d). Of the total volumes, 34% should comprise oil, while 11% and 55% are likely to be natural gas liquids and natural gas, respectively. The guidance has been revised downward from the prior estimate of 38,500-42,500 Boe/d due to the impacts of Hurricane Ida. The year-ago production was recorded at 34,459 Boe/d. The decreased output will likely affect the company’s bottom line, partially offset by increased oil and gas prices.

The company has recovered the majority of the impacted production throughout September. By October-end, it expects Big Bend and Dantzler wells to return to production. As such, fourth-quarter output is likely to be within 34,800-38,500 Boe/d. The rest of the halted production is expected to come back online by the end of this year.

For 2021, lease operating expense (LOE) is likely to be within $174-$180 million, higher than the previous guidance of $158-$174 million. The increased costs will reduce the company’s overall profit levels.

The Zacks Consensus Estimate for third-quarter earnings is pegged at 1 cent per share, indicating an improvement from the year-ago loss of 14 cents. It has witnessed one downward estimate revision but no upward movement in the past 30 days. Revenues for the third quarter are estimated at $126.6 million, signaling a 74.5% increase from the year-ago period.

The company missed earnings estimates once in the last four quarters and beat the same on other occasions, with the average surprise being 36.4%. This is depicted in the graph below. 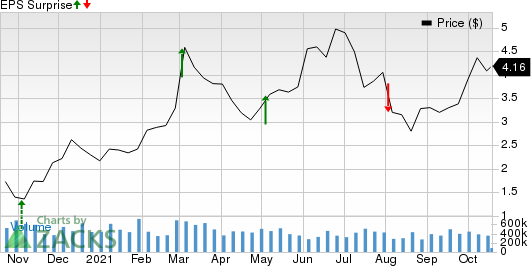