Read MoreHide Full Article
Enphase Energy, Inc. (ENPH - Free Report) recently announced the launch of its Encharge battery storage systems in Belgium, thus further expanding its footprint in the European residential solar market. Prior to the current move, the company had made successful launches of IQ 7 in Belgium and Netherlands in 2020 in an effort to capitalize on the growing European solar market.
Apart from the IQ7 family of microinverters, Encharge battery storage system comes withan all-in-one solution that aids in optimizing energy usage while reducing energy bills for customers, thereby making energy monitoring and maintenance easy.

The Encharge battery storage system offers storage configurations ranging from 3.5 kilowatt-hour (kWh) to an aggregate 42 kWh, and the ability to upgrade through the lifetime of the system. The company delivers a safe solar-plus-storage solution designed to not expose installers or homeowners to high-voltage DC. The batteries feature Lithium Iron Phosphate (LFP) battery chemistry, which provides a long cycle life and safe operation through excellent thermal stability.
The company’s Enphase Envoy communications gateway connects Enphase systems to the Enphase Enlighten mobile app, which aids in providing homeowners insights into their system. Further, the Encharge batteries are backed by a 10-year warranty with the provision of over-the-air software upgrades. Such features and provision for upgrades of software are expected to boost Enphase Energy’s demand for Encharge batteries going forward, thereby bolstering its top-line prospects.

The solar market in Belgium has been gaining tremendous momentum primarily attributable to the region’s decarbonization commitments. Evidently, according to a report of SolarPower Europe, 2020 turned out to be the strongest year for Belgium in terms of solar capacity installation. The region recorded a solar capacity addition of 1Gigawatt (GW) in 2020.
Looking ahead, per a report from Belgian National Energy and Climate Plan (NECP), Belgium is projected to have a total solar capacity of 8 GW by 2030. No doubt, such targets reflect ample growth opportunities for prominent solar battery makers like Enphase Energy, as storage batteries constitute an integral part of the solar market. Hence, the company’s latest move is a prudent one.

In the past one year, shares of Enphase Energy have gained 41.5%, compared with the industry’s growth of 3.8%. 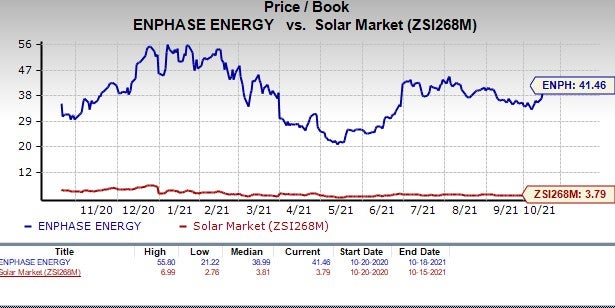 Crocs (CROX) Lined Up for Q3 Earnings: Factors Worth Noting