Esperion Therapeutics, Inc. (ESPR - Free Report) announced a plan to align its operational and expense structure, which will help the company to deliver better growth. The company plans targeted program savings and will reduce 40% of its workforce to lower its operating expense.

Esperion stated that it will streamline its sales force, and target cardiologists and primary care physicians for the promotion of its marketed drugs. The company will also come up with several digital initiatives to increase awareness and utilization of its drugs in proper patients.

The company made the decision after a systematic review, keeping in mind the challenges associated with the launch of its drugs —Nexletol and Nexlizet — amid the pandemic. While Nexletol is a bempedoic acid monotherapy tablet, Nexlizet is a combination of bempedoic acid and Merck’s (MRK - Free Report) Zetia (ezetimibe) that were approved for treating elevated LDL-C (bad cholesterol) in February 2020. Although the drugs have demonstrated strong sequential growth in the past few quarters, they lag other new cardiovascular drugs including Amgen’s (AMGN - Free Report) Repatha and Regeneron’s (REGN - Free Report) Praluent.

Esperion is currently planning to focus on the commercialization of its two drugs as well as on the ongoing CLEAR Outcomes study, a CVOT study, evaluating Nexletol and Nexlizet in patients who have statin intolerability. Top-line data from the study is expected in 2023. Although the study may take more than a year to be completed, its successful completion is likely to boost sales of the drugs.

Shares of Esperion were down 3.1% on Oct 18 following the announcement. The company’s stock has lost 65.9% so far this year compared with the industry’s 16.8% decrease. 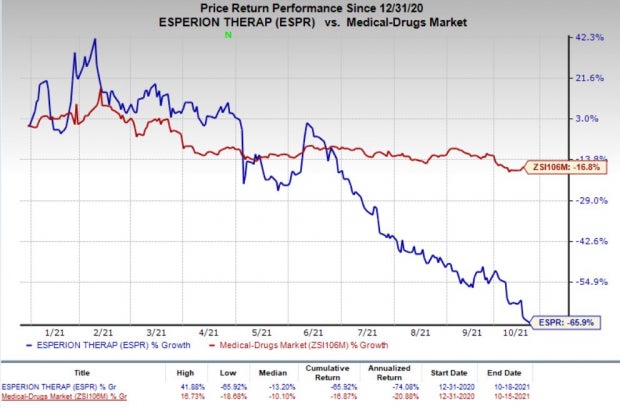 Esperion expects its transformative plan to affect its operating expense immediately. The company has lowered its guidance for research and development expenses from $120 to $130 million previously to $110 to $115 million in 2021. It also expects selling, general and administrative expenses to be in the range of $195 to $200 million compared with the previously expected range of $200 to $210 million. This implies savings of at least $20 million compared to the mid-point of the previously issued guidance. The company expects its operating expense to be in the range of $220 to $240 million in 2022.

The company expects its cash resources to be approximately $153.7 million as of Sep 30, 2021. However, the cash resource and anticipated future revenues seem not enough to support operations till the end of 2022. The company may have to seek ways to gather funds, which may include a debt agreement or sale of its common shares to support continued operations. We note that the completion of the CLEAR study will likely reduce operating expenses significantly in 2023.