Backed by the strong performance and overall business strength, management announced a hike in its quarterly dividend. The company also provided an update on its fiscal 2021 view.

Shares of this Zacks Rank #2 (Buy) company have surged 42.8% in the past three months against the industry’s decline of 8.4%. 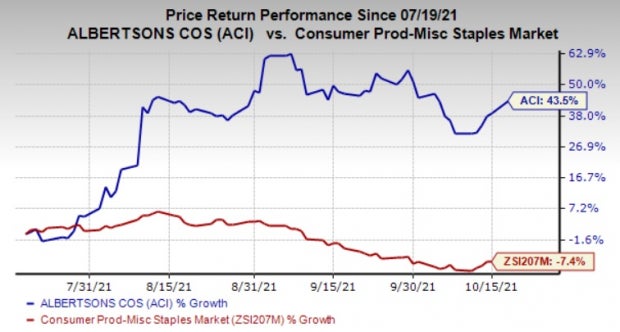 Adjusted earnings came in at 64 cents per share rising from 60 cents in the prior-year quarter. The bottom line also surpassed the Zacks Consensus Estimate of 45 cents.

Albertsons’ net sales and other revenues during the second quarter came in at $16,505.7 million, increasing 4.7% year over year. The top line surpassed the Zacks Consensus Estimate of $16,088 million. The upside was driven by a 1.5% rise in the company’s identical sales as well as higher fuel sales. On a two-year stacked basis, the company’s identical sales were up 15.3%. Digital sales were up 5% year on year, while the same surged 248% on a two-year stacked basis.

Adjusted EBITDA increased 1.8% to $965.4 million. The upside was backed by higher sales and improved sales, partly offset by rise in selling and administrative expenses. Adjusted EBITDA accounted for 5.8% of sales, down from 6% in the prior-year quarter.

Albertsons ended the quarter with cash and cash equivalents of $2,849.8 million, as of Sep 11, 2021. Long-term debt and finance lease obligations amounted to $8,129.1 million, while total shareholders’ equity amounted to $1,959.9 million.

For the 28-week period ended Sep 11, net cash from operating activities was $2,137.7 million. Capital expenditures during this period were nearly $822.5 million, including investments toward digital and technological growth endeavors as well as the opening of six new stores and remodeling of 76 stores. Management continues to expect capital expenditures for fiscal 2021 between $1.9 billion and $2 billion.

During the second quarter, the company paid out its quarterly dividend of 10 cents per share on Aug 10, 2021 to shareholders on record as on Jul 26.

In a separate release, the company announced a 20% hike in its quarterly dividend to reach 12 cents per share. The raised dividend is payable on Nov 12, 2021, to shareholders on record as on Oct 29, 2021. Management highlighted that the company was able to raise the dividend mainly due to balanced capital allocation efforts and overall strength in the business.

Adjusted earnings are anticipated in the range of $2.50-$2.60 per share compared with the earlier view of $2.20-$2.30. In the prior year, the company reported adjusted earnings of $3.24. The Zacks Consensus Estimate for earnings is currently pegged at $2.34 for fiscal 2021.

Olin (OLN) to Report Q3 Earnings: What's in the Offing?