In the past week, Delta Air Lines (DAL - Free Report) kick-started the third-quarter 2021 earnings season in the airline space. The Atlanta-based carrier reported better-than-expected earnings per share and revenues for the period. However, fuel price per gallon is likely to rise substantially going forward, which might hurt the company’s performance in the final quarter of 2021 despite the recent uptick in air-travel demand.

1. Delta’s third-quarter 2021 earnings (excluding $1.59 from non-recurring items) of 30 cents per share outpaced the Zacks Consensus Estimate of 15 cents. Results came against the year-ago quarter’s loss of $3.30 per share. Good news is that the airline behemoth delivered earnings for the first time in the September quarter of 2021 after suffering six straight quarterly losses due to COVID-induced dull passenger revenues. However, the carrier’s CEO Ed Bastian stated that “the recent rise in fuel prices will pressure our ability to remain profitable for the December quarter”. Fuel price per gallon for the December quarter is projected in the $2.25-$2.40 range.

2. Due to the rise in oil price, Allegiant travel company increased its forecast for fuel price per gallon to $2.20 from $2.19 for the September quarter. Due to higher-than-anticipated irregular operations costs, the company trimmed its third-quarter guidance for adjusted EBITDA margin. The same for the September quarter is estimated to be 15.5-16.5% (previous guidance: 16-18%). Excluding the escalated levels of irregular operations costs, adjusted EBITDA margin is expected to have been roughly 24%. With air-travel demand rising, the carrier expects its September-quarter’s total revenues to be up 5.3% now (previous expectation: up 3-5%) from the third-quarter 2019 levels.

3. Traffic at Copa Holdings declined 30.5% in September 2021 from the comparable period’s level in 2019. Capacity fell 25.8% from the 2019 level. With traffic decreasing more than the extent of capacity contraction, load factor (percentage of seats filled with passengers) deteriorated 540 basis points to 79.5% in September.

4. Southwest Airlines (LUV - Free Report) , which had cancelled multiple flights earlier this month due to factors like foul weather and air-traffic control issues, aims to reduce its carbon emissions per available seat mile by at least 20% within 2030. Initiatives like fleet modernization and route optimization are expected to help this Dallas-based carrier achieve its goal. Southwest Airlines also intends to replace 10% of its total jet fuel consumption with sustainable aviation fuel by 2030. These actions are part of the carrier’s 10-year plan to maintain carbon neutrality to 2019 levels while continuing to expand. 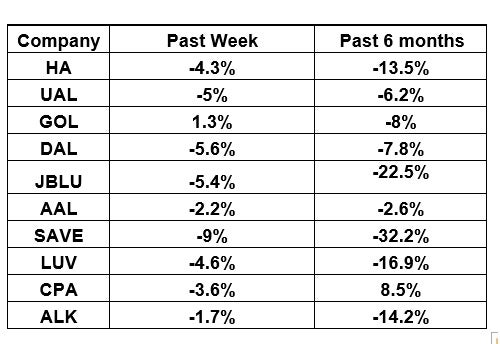