Tech Earnings Are Here: Which Ones Should You Buy?

Tech earnings have been pretty exciting for a while now, what with the pandemic accelerating the drive toward digitization, as if the need for data collection and artificial intelligence and the efficiencies of cloud computing, online media consumption and sales, etc. weren’t quite enough.

I mean, miniaturized gadgets are fairly flocking to our homes, desktops, dashboards and what have you, as people get increasingly accustomed to having what they want literally at their fingertips. And thanks to the pandemic, we now have a new demographic (children) leaving a larger footprint thanks to their learning from home as well.

Big tech companies are having a field day gobbling up all that data, notwithstanding the increasingly louder noises from lawmakers, citizens and privacy advocates.

And honestly, technology is already so deeply entrenched into our lives that trying to turn the situation around may in fact be simply a matter of transferring business from one tech co to another. When Apple (AAPL - Free Report) further secured its walled garden in the interest of user privacy for example, it was something of a hit to Alphabet (GOOGL - Free Report) and Facebook (FB - Free Report) , but generally favorable for Apple itself.

Some regulators would like to split up the companies, others would like to make them pay larger and larger fines, but it’s really hard to see them crippled, let alone brought down.

What’s far more likely to happen is that they keep on generating the strong cash flows that we’ve grown accustomed to while collecting ever-growing mounds of data that lets them keep their customer bases engaged and advertisers thrilled. Of course, they’ll need some of that cash to hire teams of lawyers to find holes in whatever laws regulators come up with and then defending their activities in court.

A far larger amount will however be spent on R&D and G&A, the first being vital to take technology (and therefore, society) forward and the second, responsible for employing increasing numbers of people. And while they’re at it, be rest assured that everything’s going to become much more efficient – across sectors – and this in turn is going to displace some jobs.

Alright, with that as a background, let’s take stock of what’s happening today.

The two buzzwords across the industry seems to be very strong demand and constrained chip supply, which are the tiny little brains of all things computing.

And from what we can tell from the Taiwan Semiconductor (TSM - Free Report) earnings read (and otherwise), this situation will continue for a few more quarters at least. Which is good news for chipmakers that can charge higher prices, but not so great for the manufacturers of smartphones, computers, other smart gadgets for the home and office, and of course for the auto sector that has been starved of chips through most of this year. A fresh wave of the pandemic has made matters worse because a number of chip makers and other electronic goods assemblers with facilities in Asia had to shut down.

Speaking of which, Taiwan Semi reported a solid quarter last week, with earnings jumping 20% from last year on revenues that grew 22.6%. While earnings beat the Zacks Consensus, revenues were just short. The company’s competitive strength lies in its leading-edge process technology that companies like Apple rely upon for their most advanced products. That’s really the reason it’s expected to continue generating strong revenues, and also the reason it continues to build capacity across countries (the latest addition being Japan).

And then, yesterday, we had Netflix (NFLX - Free Report) , which also missed the revenue estimate by sliver, despite growing 16.3% from last year. Earnings however beat by a mile (24.6%), as the company reported solid subscriber adds (all regions were up but strongest increase in the Asia/Pac and EMEA regions, partly attributable to lower penetration), as well as new revenue per sub (up across regions, but strongest growth in North America). The 4.4 million net paid subscriber adds is encouraging given the increasing competition and says something for its business model.

Netflix’s story is essentially about subscriber ads and pricing, since it doesn’t generate anything from ads. And that’s the only way it can continue to build a pipeline of hit shows, games and other content that can keep users engaged.  While cash flow was positive last quarter, this is a high investment business, so the 8.5 million net paid adds expected this quarter is encouraging. Zacks has a #3 (Hold) rating on NFLX shares.

Next up is Tesla (TSLA - Free Report) , which will be reporting third quarter numbers after the bell today. I’ve been a long-term bull on Tesla and this stock has been very rewarding for all those who had the patience and stomach to hold on to the shares when Elon Musk had nothing to offer but promises. Now that we’re in 2021, it’s plain for all to see that the company is posting very solid growth numbers, quarter upon quarter and year upon year. And that’s despite the chip shortage that has racked the entire auto industry.

Tesla is somewhere between an automaker and a tech company because it makes the most advanced and attractive (and hyped) cars in a highly techie way. And it has straddled the EV trend earlier than traditional automakers.

While that doesn’t mean it’s going to be the ultimate winner in the space, Tesla has clearly made a place for itself. The company recently pushed back delivery schedules on most of its models, so it isn’t immune to the chip crunch either. The Zacks predictive model (Earnings Expected Surprise Prediction, or ESP) points to a solid beat. But we’ll know more about this on the call. There’s a #1 (Strong Buy) rating on these shares.

Some other stocks that look attractive right now are #2 (Buy) ranked Alphabet, Microsoft (MSFT - Free Report) and Advanced Micro Devices (AMD - Free Report) . Let me touch on each one briefly.

Alphabet is a direct beneficiary of increased online activity and advertiser spend and there’s positive momentum in both. The company also offers cloud infrastructure, which is benefiting from pandemic inflicted acceleration.

This is one old company that continues to grow like a new one on the back of a very strong core search business that’s supplemented by increasing contributions from cloud, gadgets and the Play Store. And its solid cash flows allow significant reinvestment, both in the core and in moonshots that have allowed it to develop autonomous driving technology, health tech and more.

This is also one of the few companies that benefited both from the pandemic, as more activity moved online and the reopening that is encouraging increased advertiser spending. As far as the numbers are concerned, the Zacks ESP model predicts another beat, on top of its regular earnings beats when the company reports on Oct 26.

Microsoft is a prime beneficiary of the work and learn from home trends that have developed over the past year or more. That’s because it provides many of the tools that we need to do these things. That’s why its per share net cash has been robust throughout this period. But the company is also a major provider of cloud infrastructure and services, with Azure being the primary challenger to Amazon’s (AMZN - Free Report) AWS.

The company adopted the hybrid strategy early on, which is helping to shift its legacy user base to the new normal. The focus on cloud is clearly paying off as it continues to grow the strongest and account for an increasing share of revenue and profits. Productivity solutions are still in a state of transition, and there’s some offset when customers shift to the cloud.

Devices, gaming and other things are also trending up, although they’re not as strong as the first two segments. Our ESP model seems to indicate that another surprise is possible, and going by its past record, it will surely report a surprise when it reports on Oct 26.

And finally, we have AMD. The chipmaker headed by Lisa Su has stolen everyone’s hearts with its steady resolve and slew of innovations that pulled the rug from under Intel. So while Intel struggled with yield issues, leadership, complacency and other things, AMD doubled down on delivering the goods. And that included internally developed advanced technology designs and strategic acquisitions.

The company’s revenues and earnings have been soaring since the pandemic hit last year and business has only strengthened further this year (management expects 60% revenue growth this year) as it continues to take share from Intel. Our ESP model indicates another beat this quarter.

When choosing tech stocks, it’s better to check the growth profile than the valuation (especially when comparing with broader indexes), because they can seem excessive. But most of these tech players are fast-growing, so when they report stronger and stronger numbers, the multiple you pay today actually starts looking cheap. So it makes sense to buy at these levels. All indications are that this is going to be a pretty solid quarter for tech stocks, particularly the large, competitively strong names discussed above. 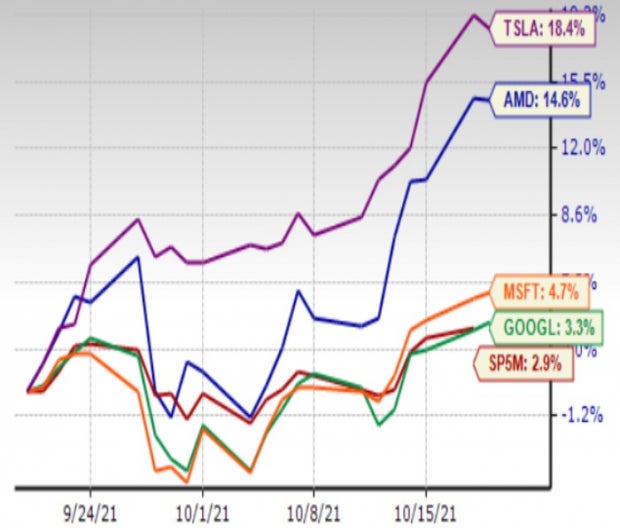