Brinker International, Inc. (EAT - Free Report) provided selected business results for first-quarter fiscal 2022 and business update for second-quarter fiscal 2022. The company’s shares declined 12.2% in the after-hour trading session on Oct 19 following its announcement that higher-than-expected labor and commodity costs due to the COVID-19 surge in August impacted the bottom line and margins.

Adjusted earnings in the quarter increased to 34 cents, compared with 28 cents reported in the prior-year quarter. However, adjusted earnings missed the Zacks Consensus Estimate of 68 cents.

In the quarter under review, Restaurant operating margin, as a percentage of company sales decreased 120 basis points year over year to 10.4%. The decline was primarily due to 150 bps of higher restaurant labor costs and 60 bps of higher commodity costs.

Shares of Brinker have declined 27% in the past six months against the industry’s growth of 1.5%. The dismal performance can primarily be attributed to the coronavirus pandemic. 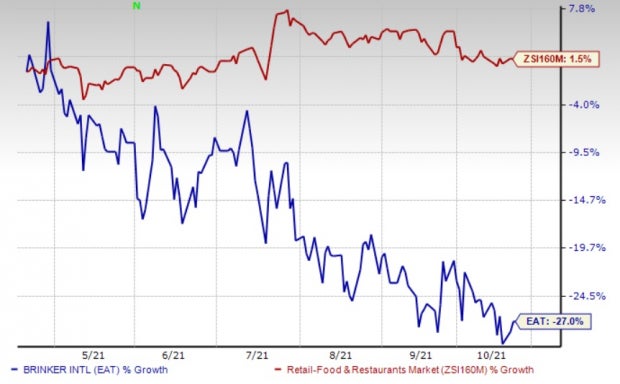 Month to date through Oct 13, comparable restaurant sales for Brinker, Chili's and Maggiano's increased 6.6%, 7.3% and 1.5%, respectively.

Darden Restaurants has a three-five year earnings per share growth rate of 10%.

Dave & Buster's Entertainment has a trailing four-quarter earnings surprise of 201.8%, on average.