Lightsource bp — in which BP plc (BP - Free Report) owns a 50% stake — recently announced that it has entered the Polish market through a 757-megawatt co-development deal. A total of nine projects — located in Zachodnio-pomorskie, Dolnoslaskie, Lubuskie and Wielkopolskie — are included in the portfolio.

BP will develop the projects with a local renewable energy company and expects half of them to be construction-ready next year. It expects to sell a portion of the power generated from the projects in the open market. It is also looking for long-term power purchase agreements with large corporations. Full development of the portfolio is expected to require €500 million (around $581.4 million) in investments.

Once the projects come online, they can effectively power 362,870 homes. The European country currently has 6 gigawatts of installed solar capacity, which is expected to grow significantly in the near future. As such, the latest move will enable Lightsource bp to create a strong renewable base in Poland, which will later help it expand its presence in the country.

Lightsource bp was formed in 2018, with the combined expertise of Lightsource Renewable Energy and BP. The British energy major is boosting capital spending on the renewable power business under the leadership of CEO Bernard Looney. It has set an aggressive energy transition plan to capitalize on the mounting clean energy demand.

BP has set an ambitious goal of developing 50 gigawatts of net renewable energy generating capacity in a decade, indicating a massive improvement from the 2.5 GW capacity that the company has developed so far. It intends to boost low-carbon spending to $5 billion per annum by 2030. Within this period, it plans to reduce emissions from operations by 30-35%. It also intends to reduce the weightage of hydrocarbons from the portfolio by 40% from 2019 levels.

Given the current energy crisis in Europe, the solar projects can help Poland reduce power dependency. It is to be noted that several companies in the continent are currently tapping on renewable resources to increase their clean energy portfolio, after receiving immense pressure from investors. Energy giants like BP, Equinor ASA (EQNR - Free Report) , Royal Dutch Shell plc (RDS.A - Free Report) , and TotalEnergies SE (TTE - Free Report) are actively boosting the share of renewables in the energy mix in their portfolios in Europe as well as other regions.

BP’s shares have gained 45.5% in the year-to-date period compared with the 44.2% rise of the industry it belongs to. It currently sports a Zacks Rank #1 (Strong Buy). You can see the complete list of today’s Zacks #1 Rank stocks here. 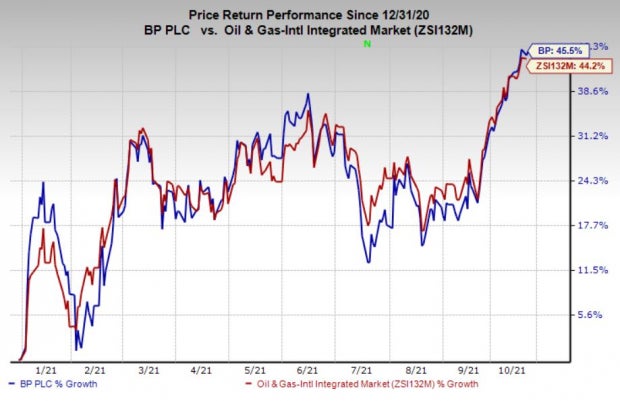