Sage, Biogen Plan to File Zuranolone NDA for MDD in 2022

Sage Therapeutics, Inc. (SAGE - Free Report) and partner Biogen Inc. (BIIB - Free Report) announced that they plan to submit a new drug application (“NDA”) for their oral depression candidate, zuranolone, in the second half of 2022. However, the companies will start rolling submission of the NDA in early 2022. The NDA will seek approval for the candidate as a potential treatment of major depressive disorder (“MDD”). The decision to submit the NDA for zuranolone was based on a recent discussion with the FDA, including a pre-NDA meeting.

The NDA will include data from two successfully completed late-stage studies — LANDSCAPE and NEST — along with data from ongoing clinical and pharmacology studies. Clinical data on zuranolone demonstrated that the candidate achieved consistent, rapid, and sustained reductions in depressive symptoms. The companies completed a late-stage study, WATERFALL, evaluating zuranolone in MDD patients in June 2021. Data from the study demonstrated that treatment with the candidate achieved statistically significant and clinically meaningful reduction in depressive symptoms in patients.

The companies are also evaluating zuranolone, co-initiated with a newly administered standard antidepressant therapy, as a potential acute rapid response treatment in patients with MDD in a phase III CORAL study. Top-line data from this study is anticipated in early 2022.

Sage and Biogen are also developing the candidate as a potential treatment for postpartum depression (“PPD”). Currently, an ongoing phase III study is evaluating the candidate in PPD patients. The companies plan to file a separate regulatory application seeking approval for zuranolone as a potential treatment for PPD in the first half of 2023, pending successful completion of the late-stage study.

Shares of Sage have declined 53.5% so far this year compared with the industry’s 17.7% decrease. 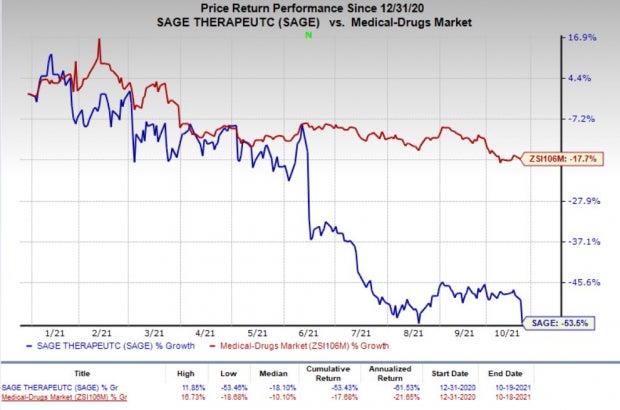 We note that Sage and Biogen entered into a global collaboration and license agreement for developing and commercializing potential breakthrough therapies in depression and movement disorders in November 2020. The agreement includes the development of two candidates from Sage Therapeutics’ pipeline — zuranolone and SAGE-324.

SAGE-324, a mid-stage candidate, is being developed for treating essential tremors.

Sage is also developing another pipeline candidate, SAGE-718, as a potential treatment for Parkinson’s disease, dementia and Huntington’s disease in several early to mid-stage studies. The company has several other early-stage pipeline candidates in its pipeline. The company has one marketed product, Zulresso, in its portfolio, which was approved for treating PPD in 2019.