A. O. Smith Corporation (AOS - Free Report) yesterday announced that it expanded its commercial and water heater offerings through the acquisition of Canada-based Giant Factories, Inc. The buyout has been valued at $192 million in cash.

Giant Factories, a privately-held company, has a solid customer base for its Giant-branded products in Canada. It carries out manufacturing activities in two Montreal-based facilities. In the trailing 12 months, Giant Factories generated revenues totaling $105 million.

In addition to strengthening product offerings, the Giant Factories buyout is anticipated to boost A. O. Smith’s strategy of expanding businesses in the North America markets. It will also increase A. O. Smith’s manufacturing and distribution capabilities as well as create opportunities through healthy replacement demand. Giant Factories’ employee base of 300 people will likely prove to be a boon for A. O. Smith.

Notably, Giant Factories’ majority of the end markets are served by non-carbon intensive and hydro-sourced grids. Such dependence on the supply of renewable energy is in sync with A. O. Smith’s plan of reducing its carbon footprint.

For fourth-quarter 2021, A. O. Smith anticipates a neutral impact on earnings from the Giant Factories buyout, while predicting earnings accretion in the first year of the transaction completion.

The company anticipates benefiting from operating synergies in the first two years of the transaction completion. It also expects $6.5 million of tax benefit from treating the buyout as a purchase of assets for tax purposes. Taking into account these synergies and benefits, A. O. Smith predicts a $192-million purchase price to represent 9.5X projected adjusted earnings before interest, tax, depreciation and amortization for 2023.

Acquiring businesses are effective ways for A. O. Smith to gain access to new markets, expand its product line and enhance the customer base.

In July 2021, the company acquired Master Water Conditioning Corporation in a cash transaction. The buyout is predicted to strengthen the company’s water treatment business in North America.

For 2021, A. O. Smith anticipates generating $200 million in revenues from its water treatment business in North America.

With a market capitalization of $10.4 billion, A. O. Smith currently carries a Zacks Rank #4 (Sell). A healthy liquidity position, synergistic gains from buyouts and the strengthening replacement business are likely to be beneficial. High costs and expenses might be concerning.

In the past three months, the company’s stock has lost 7.4% compared with the industry’s decline of 2%. 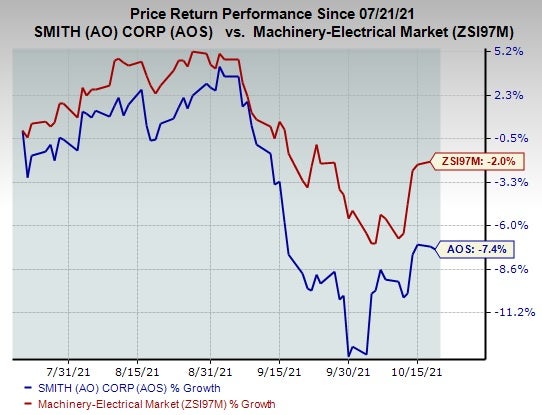 In the past 60 days, earnings estimates for the companies improved for the current year. Further, the earnings surprise for the last reported quarter was 16.92% for AZZ, 14.15% for Nordson and 33.11% for Kadant.