The October resurgence has pushed the S&P 500 within touching distance of its early September records amid a strong start to the third quarter earnings season. The bulls fought their way back into control of the market, shrugging off supply chain worries, rising prices for everything from energy to consumer staples, and other economic headwinds.

The current climb began right around October 4 when some big names fell into oversold technical levels, including the Nasdaq 100-tracking QQQ ETF. The S&P 500 is currently trading around 0.5% below its highs, while the tech-heavy index is back within roughly 1.5% of its records.

A ton of uncertainty remains heading into the winter and the holiday shopping period. And many traders and analysts projected a bigger downturn, with the S&P having only ever dropped a little over 5% from its records. Still, the positivity rolls on, as Wall Street appears somewhat sanguine about the U.S. economy and American consumers.

Reports from industry giants and economic bellwethers are starting to come in at a rapid pace, as we enter the busy part of Q3 earnings season, with results from Apple (AAPL - Free Report) , Amazon (AMZN - Free Report) , Microsoft (MSFT - Free Report) , and many other mega-cap tech stocks all due out next week.

Along with some of the household names, many more under the radar tech-focused stocks are set to report financial results in the coming weeks. Investors might want to consider buying a few select names still trading at solid discounts to their records ahead of earnings… 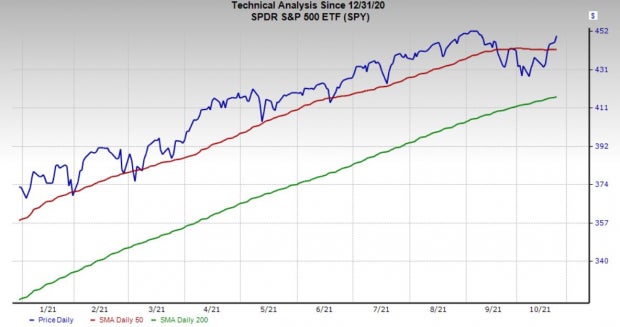 Align Technology’s Invisalign permanently altered the traditional orthodontics industry. ALGN’s clear aligner systems are true alternatives to traditional metal braces and have grown in popularity since its founding in 1997 (IPO in 2001). ALGN also spawned a whole subset of the orthodontics space that includes Candid, SmileDirectClub (SDC - Free Report) , and others.

Align offers people the ability to straighten their teeth and correct other orthodontics-related issues, often at lower prices. ALGN has treated over 10 million patients and its portfolio extends beyond clear aligners to its iTero intraoral scanner and exocad CAD/CAM software that identifies the issues and helps create the best plans to fit the patient’s needs.

Wall Street and patients love that Align works hand-in-hand with dentists and orthodontists who digitally scan a patient’s teeth in person and work them through the entire process. Competitors are more committed to an e-commerce-focused approach.

The company has also expanded its reach within the key teenage demographic, as it successfully attracts more people who might have otherwise used traditional metal braces. And Align is growing its international reach. 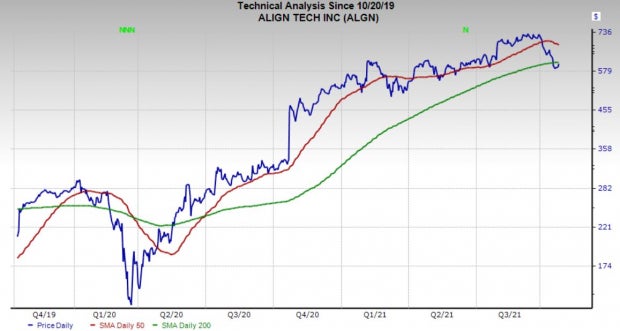 ALGN’s revenue climbed by an average of 25% in the past five years, weighed down by 3% growth in covid-hit 2020. It’s bounced back in a big way since then and Zacks estimates call for its adjusted FY21 earnings to soar 109% on 58% stronger sales to hit $3.92 billion. The Invisalign maker is then projected to post 21% stronger revenue and 20% higher earnings in 2022.

Align has crushed our bottom-line estimates in the trailing four quarters and its consensus estimates are up since its last report. ALGN, which lands a Zacks Rank #3 (Hold) right now, has improved its balance sheet in the last year and boosted its stock buyback program. Plus, Wall Street is extremely high on the stock, with 10 of the 11 brokerage recommendations Zacks has sitting at “Strong Buys.”

ALGN shares have skyrocketed nearly 600% in the last five years and are up 190% in the past 24 months. Luckily, the stock has pulled back from its records and investors might find an enticing entry point right now.

Align closed regular hours Wednesday roughly 17% below its September highs at $608.20 a share. And it trades at its year-long lows in terms of forward earnings. Investors should note it just jumped out of oversold RSI (30 of under) territory and it is poised to break through its 200-day moving average.

Garmin helped jump start the modern consumer-facing GPS movement 30 years ago. Today, its in-car navigation systems, fitness wearables, and smartwatches have made it a household name.

Consumers are more connected than ever and many want to track everything from their steps to their heart rates. Fitness revenue climbed 40% last quarter and it was the biggest top-line contributor, accounting for around 31% of total revenue.

Along with its everyday consumer electronics, the Switzerland-headquartered firm sells high-end fish finders, advanced radars and systems for boats and airplanes, and much more. For instance, Garmin in February landed an agreement with Joby Aviation for tech to help create “scalable air taxi services.” The GPS technology powerhouse is diversified and still growing at an impressive, steady clip.

GRMN’s posted its fifth-straight year of revenue growth in 2020, with sales up 11%. More recently, GRMN posted 25% first quarter sales expansion and 53% in Q2. Garmin also raised its full-year guidance last quarter on the back of broad-based strength heading into the holiday season.

Looking ahead, Zacks estimates call for GRMN’s fiscal 2021 sales to climb 18% to $4.94 billion, with FY22 set to pop another 8% higher. Meanwhile, its adjusted EPS figures are expected to climb by 9% and 13%, respectively over this stretch. Plus, it’s topped our EPS estimates by an average of 39% in the trailing four periods. 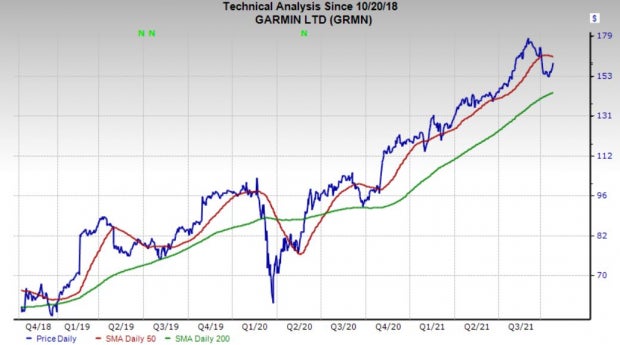 Garmin management runs a financially sound operation, with no debt on its books at the moment, while holding $3.2 billion in cash and marketable securities. And it generated roughly $120 million of free cash flow last quarter. Plus, its 1.65% dividend yield matches the 10-year U.S. Treasury.

The payout is made more impressive by its performance, with GRMN up 235% in the past five years to outpace the tech sector’s 180% run. Despite its sector-topping stretch, Garmin trades at a discount against the broader technology space at 25.8X forward 12-month earnings—which is right around its own-year long median.

The stock has popped 60% in the past year and 35% in 2021 to continue its tech outperformance. Like ALGN and much of the market, Garmin began to fall in early September. The stock closed regular hours Wednesday at $162.31 a share, which marked a roughly 10% discount to its records. And GRMN is already regaining some steam, up 6% since October 11. The recent move higher lifted it out of oversold RSI levels and it still trades right around neutral.

Buy This Resurgent Tech Stock at a Discount Before Q3 Earnings?