Over the past five trading days, U.S. telecom stocks witnessed a late flurry after a relatively flat trajectory. This was primarily led by optimism surrounding the passage of the $1.2 trillion infrastructure bill in the House driven by President Biden’s continued efforts to broker a deal between the warring factions of the Democrats. The bill has been stuck in a potential stalemate for weeks, as several progressive Democrats wanted it to be tied to the larger $3.5 trillion budget reconciliation bill that is facing massive backlash from both Republicans and Democrats. The Democrats have presently set a deadline of Oct 31 to pass the bill, the day on which major transportation funding programs are slated to expire. Biden is reportedly negotiating with the progressives and has put forth a range of $1.9 trillion to $2.2 trillion for the social spending reconciliation package. The ongoing negotiations are expected to lead to a broader consensus on some of the sweeping policies that the government is aiming to implement before November 2022 congressional elections. In addition, a solid start to the earnings season with a healthy performance from hitherto reported companies likely buoyed the upswing over the past week.

The infusion of federal funds to improve broadband infrastructure for greater access and deeper penetration in the underserved domestic markets is likely to bridge the digital divide and help realize President’s Biden goal of providing all Americans with affordable Internet connectivity. The infrastructure investments are further billed as a critical factor to better compete with foreign adversaries such as China. The bill is also likely to pave the way for $52 billion in funding for the domestic semiconductor industry and boost the production of chips. The legislation that was delayed due to infighting among Democrats is likely to be back on track, as lawmakers are expected to quickly reconcile their differences and get it ready for Biden’s signature to be deemed as a law.

Meanwhile, Republican FCC Commissioner Brendan Carr has called for stiff restrictions against China-based drone maker SZ DJI Technology Co., which accounts for more than half of U.S. drone sales. He suggested that the federal agency should impose stricter norms to curb its operations, as the world’s largest drone maker reportedly collects sensitive data from critical infrastructure facilities and other government establishments. The FCC has already laid out new rules for the approval of entities operating in the United States with a certain level of foreign investment or control. The mandate requires companies with at least 5% foreign ownership interest to submit extensive personally identifiable information for all non-U.S. persons with access to submarine cable facilities when applying for FCC licenses. Such stricter regulations are likely to ensure that national security interests are not compromised as the battle for 5G supremacy heats up.

Regarding company-specific news, quarterly earnings and strategic agreements primarily took the center stage over the past five trading days.

1.     Verizon Communications Inc. (VZ - Free Report) reported relatively strong third-quarter 2021 results with the bottom line beating the Zacks Consensus Estimate. Backed by a disciplined network strategy for long-term growth along with a focused roadmap for technology leadership, the company witnessed a healthy demand curve across core businesses. Verizon expects this momentum to continue throughout the rest of the year driven by customer-centric business model and diligent execution of operational plans and revised its earlier guidance to better reflect the improving business conditions.

The business aviation market in Brazil is reportedly the third largest in the world and assumes relative importance as the key gateway to Latin American markets. Business aviation is often considered as an economic lifeline for areas with limited options for business transportation and contributes significantly to the local and national economies. With government-friendly policies, the business aviation market in Brazil is likely to witness a healthy growth momentum, benefiting companies like Viasat in the long run.

On a GAAP basis, net loss in the September quarter was $2.1 million or a loss of 2 cents per share compared with a net loss of $4 million or a loss of 3 cents per share in the prior-year quarter. The year-over-year narrower loss was mainly driven by operating profit improvement and lower net interest expenses. The bottom line matched the Zacks Consensus Estimate. Quarterly revenues totaled $162.2 million compared with $151.5 million in the year-ago quarter, mainly driven by strength in subscriber equipment sales and higher service revenues. The top line surpassed the consensus mark of $155 million.

Quarterly net income per ADR came in at 24 cents compared with 26 cents in the prior-year quarter. The bottom line missed the Zacks Consensus Estimate by 8 cents. Despite a strong demand for broadband services, quarterly total revenues dipped 2.6% to MxP253,375 million ($12,654.3 million). This was primarily due to lower service and equipment revenues. The top line surpassed the consensus estimate of $12,370 million.

5.    Nokia Corporation (NOK - Free Report) has been chosen by ARC Solutions to provide a high-capacity data center interconnection solution in the Middle East. ARC, a joint venture between UAE’s du and Bahrain’s Batelco, provides networking solutions that simplify connecting and optimizing applications and services across the Middle East.

The initial deployment, covering four major business locations, was made in just six months to meet the rising traffic demands from ARC customers. ARC has deployed Nokia’s IP and optical solutions to provide high-capacity connectivity between SmartHub in UAE, datamena in UAE, GlobalZone in Bahrain, and Muscat MC1 in Oman. 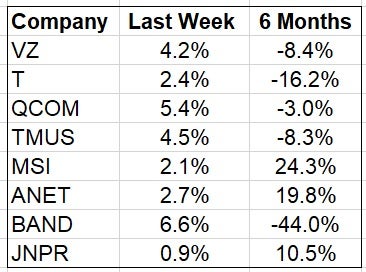 In the past five trading days, Bandwidth has been the best performer with its stock gaining 6.6% while none of the stocks declined.

Over the past six months, Motorola has been the best performer with its stock appreciating 24.3% while Bandwidth has declined the most with its stock falling 44%.

Over the past six months, the Zacks Telecommunications Services industry has declined 9.3% while the S&P 500 has rallied 9.2%. 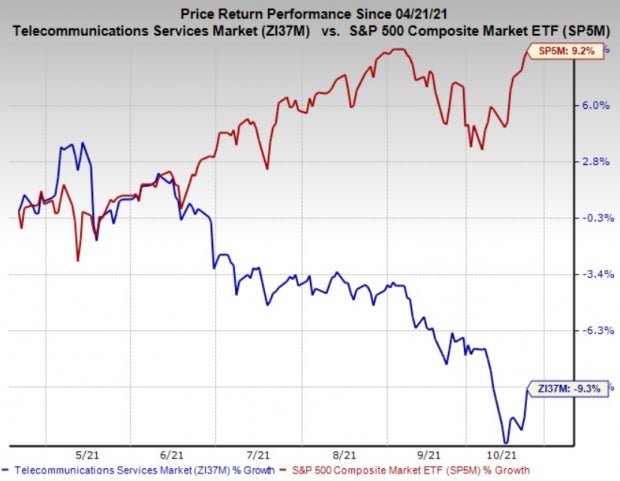 In addition to 5G deployments and product launches, all eyes will remain glued to how the administration implements key policy changes to safeguard the interests of the industry and address the bottlenecks to spur growth as the earnings season picks up.

MarineMax (HZO) Lined Up for Q4 Earnings: Factors to Note