Jack in the Box (JACK) to Expand Presence With New Agreements

Jack in the Box Inc. (JACK - Free Report) recently awarded seven development agreements to open 47 new restaurants. With this initiative, the company will boost presence in existing markets including Los Angeles, Dallas and Houston as well as new ones like Salt Lake City and Louisville.

Moreover, the company stated expansion plans with the involvement of veteran multi-unit franchisees like David Beshay (one of the brand’s largest operators). The franchisee expects to open at least 30 additional locations within the next 5-8 years. It is worth mentioning that the company awarded 23 development agreements (year to date) to build 111 stores over the next several years.

With respect to the development agreements, Darin Harris, CEO of Jack in the Box, stated, “Our franchisees want to grow with Jack in the Box and there’s sizable demand for our brand in a variety of markets around the country. Current and prospective operators know the business opportunity available to them and they are motivated to grow their portfolios with Jack.”

We believe that franchising a large chunk of its system will lower its general and administrative expenses and thereby boost earnings. In the long term, it will generate a higher return on equity by lowering capital requirements. This would also boost free cash flow and enhance shareholders’ return.

Jack in the Box stated that it witnessed a rise of 14% year over year in system-wide same store sales through the end of its most recent third quarter.

The company is also focused on the MK12 prototype (off-premise only), featuring a lane for drive-thru as well as a lane for online pickup and third-party delivery. The company stated that the new prototype will cut development costs 18-23% and pave the path toward more storage capacity and dual-assemble kitchens. It expects to open MK12 locations in Oklahoma and California in fiscal 2022. This along with emphasis on accessibility through digital solutions including its loyalty program ("The Jack Pack") is likely to boost the company in the upcoming periods. 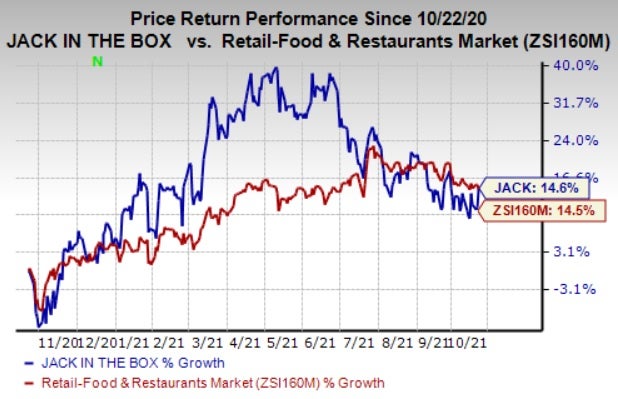 In the past year, shares of Jack in the Box have gained 14.6% compared with the industry’s 14.5% growth.

Denny's has a three-five year earnings per share growth rate of 9%.

Darden has a trailing four-quarter earnings surprise of 15.3%, on average.