Freeport-McMoRan Inc. (FCX - Free Report) recorded net income (attributable to common stock) of $1.4 billion or 94 cents per share in third-quarter 2021 versus $329 million or 22 cents in the year-ago quarter.

Barring one-time items, adjusted earnings per share came in at 89 cents. The figure beat the Zacks Consensus Estimate of 78 cents.

The mining giant benefited from higher realized prices and lower costs in the quarter.

Copper production rose 17% year over year to 987 million pounds in the third quarter.

Consolidated average unit net cash costs per pound of copper were $1.24, down about 6% year over year. The downside was due to reduced leach unit production costs associated with higher recoveries.

Cash flows provided by operations were $1,965 million for the third quarter of 2021.

For 2021, Freeport anticipates consolidated sales volumes to be roughly 3.8 billion pounds of copper.

The company also expects gold sales volumes of 1.3 million ounces for 2021. It also expects sales of 85 million pounds of molybdenum for the year.

Freeport’s shares have rallied 112.1% in the past year compared with a 67.4% rise of the industry. 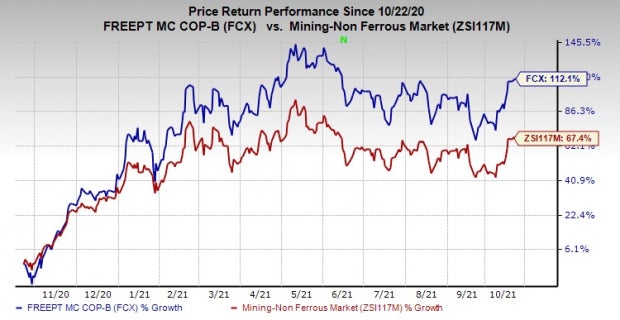 Nucor has a projected earnings growth rate of around 581.1% for the current year. The company’s shares have soared 111.2% in a year. It currently sports a Zacks Rank #1 (Strong Buy). You can see the complete list of today’s Zacks #1 Rank stocks here.

Chemours has an expected earnings growth rate of around 86.4% for the current year. The company’s shares have gained 41.1% in the past year. It currently carries a Zacks Rank #2 (Buy).

Olin has an expected earnings growth rate of around 677% for the current year. The company’s shares have surged 209.3% in the past year. It currently flaunts a Zacks Rank #1.