Total revenues of $3.39 billion outpaced the consensus estimate by 1% and increased 21.7% year over year on a reported basis and 21.1% on constant-currency basis. The reported figure exceeded the guided range of $3.29-$3.365 billion. 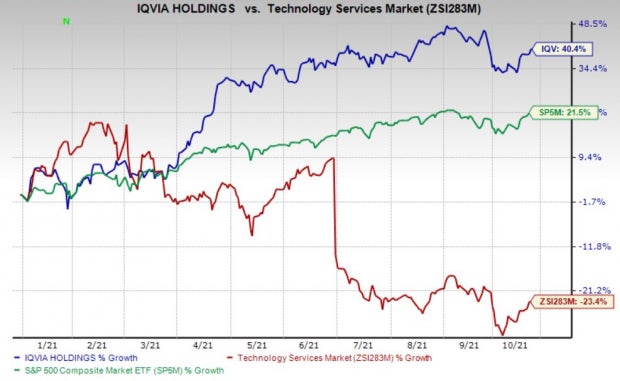 Revenues from Technology & Analytics Solutions totaled $1.34 billion, up 10.8% on a reported basis and 9.9% on constant-currency basis.

Research & Development Solutions’ revenues of $1.85 billion increased 32.4% on a reported basis and 31.9% on constant-currency basis.

Revenues from Contract Sales & Medical Solutions totaled $201 million, up 12.3% on a reported basis and 12.8% on a constant-currency basis.

IQVIA exited third-quarter 2021 with cash and cash equivalents balance of $1.47 billion compared with $1.81 billion at the end of the prior quarter. Long-term debt of $12.1 billion was flat sequentially.

The company generated $844 million of cash from operating activities in the reported quarter and CapEx was $162 million. Free cash flow was $682 million.

During the reported quarter, IQVIA repurchased shares worth $125 million. As of Sep 30, 2021, the company had nearly $697 million of share-buyback authorization remaining.

IQVIA expects fourth-quarter revenues in the range of $3.537-$3.612 billion. The current Zacks Consensus Estimate of $3.47 billion lies below the guidance.

Adjusted earnings per share are expected between $2.37 and $2.47. The Zacks Consensus Estimate of $2.38 lies within the guidance.

Adjusted EBITDA is anticipated between $786 million and $816 million.

Adjusted earnings per share are expected between $8.85 and $8.95 compared with the prior forecast of $8.70-$8.90. The current Zacks Consensus Estimate of $8.84 falls short of the revised outlook.

Adjusted EBITDA is anticipated between $2.98 billion and $3.01 billion compared with the prior prediction of $2.95-$3 billion.

What's in Store for Matador Resources (MTDR) in Q3 Earnings?