An impressive start to the third-quarter 2021 earnings season and a series of solid economic data released in October confirmed the unhindered recovery of the U.S. economy amid prolonged supply-chain disruptions, labor shortage and higher inflationary pressure.

As of Oct 21, 100 S&P 500 companies reported third-quarter results. Total earnings of these companies are up 45.3% year over year on 16.6% higher revenues with 87% beating EPS estimates and 75% surpassing revenue estimates.

At present, total third-quarter earnings of the market's benchmark — the S&P 500 Index — are projected to jump 31.5% from the same period last year on 14.3% higher revenues. This suggests a steady improvement from 26.1% earnings growth on 14% higher revenues, estimated at the beginning of the reporting cycle.

Several economists and financial experts have raised their eyebrows regarding the continuation of U.S. recovery after nonfarm payrolls measurably failed to meet consensus estimates in the two consecutive months of August and September. Despite this, the unemployment rate dropped sharply to 4.8% in September from 5.2% in August.

However, weekly jobless claims stayed at the low-end of the pandemic era over the last three months. Initial jobless claims fell below 300,000 in the last two reported weeks. This is the best level since Mar 14, 2020, just before the COVID-19 outbreak in the United States.

Retail sales in September rose 0.7% in contrast to the consensus estimate of a decline of 0.1%. Moreover, the data for August was revised upward to 0.9% from 0.7% reported earlier. Year over year, retail sales climbed 13.9% in September.

Retail sales rose steadily despite the termination of the weekly unemployment benefit on Sep 6. This is important since retail sales consist of a major part of consumer spending, the largest driver of the U.S. economy. The main reason for the strong retail sales data was a sharp decline in the Delta variant cases of the COVID-19 infection.

We have narrowed down our search to five stocks that are members of any of the above-mentioned three major stock indexes. These stocks have seen positive earnings estimate revisions in the last 7 seven days indicating that the market is expecting these companies to do robust business for the rest of 2021.

These stocks have provided double-digit returns in the past six months. Finally, each of our picks carries a Zacks Rank #1 (Strong Buy). You can see the complete list of today’s Zacks #1 Rank stocks here. 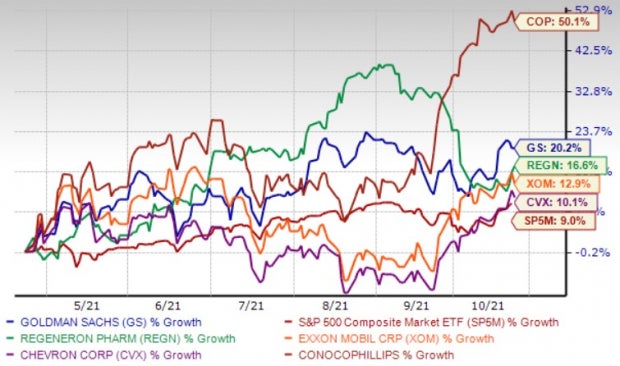 The Goldman Sachs Group Inc. (GS - Free Report) has been undertaking initiatives to boost its asset management and wealth management business, while expanding its digital consumer banking platform. The company remains on track to roll out digital checking facilities in 2022. A solid position in announced or completed mergers & acquisitions globally is likely to drive its investment banking revenues in the near term.

The company has an expected earnings growth rate of more than 100% for the current year. The Zacks Consensus Estimate for current-year earnings improved 12.8% over the last 7 days. The stock price has jumped 20.2% in the past six months.

Chevron Corp. (CVX - Free Report) is one of the best-placed global integrated oil firms to achieve a sustainable production ramp-up. Its existing project pipeline is one of the best in the industry, thanks to its premier position in the lucrative Permian Basin.

Chevron’s Noble Energy takeover has expanded its footprint in the region and the DJ Basin. The company now has access to Noble Energy’s low-cost, proven reserves along with cash-generating offshore assets in Israel – particularly the flagship Leviathan natural gas project — thereby boosting its footing in the Mediterranean.

The company has an expected earnings growth rate of more than 100% for the current year. The Zacks Consensus Estimate for current-year earnings improved 2.5% over the last 7 days. The stock price has advanced 10.1% in the past six months.

Recently, ConocoPhillips announced an agreement to purchase all of Royal Dutch Shell’s assets in the prolific Permian. The deal reflects ConocoPhillips’ aim of broadening its Permian presence. The transaction is highly accretive and involves the acquisition of roughly 225,000 net acres in the heart of the core Delaware basin.

The company has an expected earnings growth rate of more than 100% for the current year. The Zacks Consensus Estimate for current-year earnings improved 2.9% over the last 7 days. The stock price has soared 50.1% in the past six months.

Regeneron Pharmaceuticals Inc. (REGN - Free Report) is benefiting from strong demand for Eylea and Dupixent. Continued growth in Eylea and Dupixent through further penetration in existing indications and a promising late-stage pipeline bode well. The approval of Libtayo in the lucrative indication of NSCLC and BCC should also boost sales.

The company has an expected earnings growth rate of 98.2% for the current year. The Zacks Consensus Estimate for current-year earnings improved 0.1% over the last 7 days. The stock price has climbed 16.6% in the past six months.

Exxon Mobil Corp. (XOM - Free Report) made multiple world-class oil discoveries at the Stabroek Block, located off the coast of Guyana. Recently, the company raised the estimate for discovered recoverable resources from the Stabroek Block to approximately 10 billion oil-equivalent barrels.

The company has an expected earnings growth rate of more than 100% for the current year. The Zacks Consensus Estimate for current-year earnings improved 0.4% over the last 7 days. The stock price has surged 12.9% in the past six months.