Flowserve (FLS) to Report Q3 Earnings: What's in the Cards?

The company surpassed estimates twice in the last four quarters and missed it twice, the surprise being 9.01%, on average. Its second-quarter 2021 earnings of 37 cents per share lagged the Zacks Consensus Estimate of 43 cents by 13.95%. 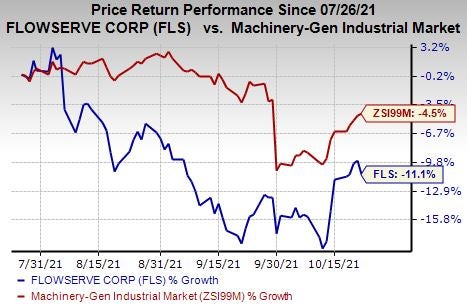 In the past three months, the company’s shares have lost 11.1% compared with the industry’s decline of 4.5%.

Challenging conditions in the original equipment end markets are expected to have adversely impacted Flowserve’s performance in the third quarter. The resurgence of coronavirus-led issues across end markets in the Asia Pacific has caused delays in capital spending, which is expected to have hurt Flowserve's top-line performance. However, strength in its maintenance, repair & operations, as well as aftermarket end markets, is likely to have been beneficial. The Zacks Consensus Estimate for third-quarter revenues from the company’s Flow Control Division segment is currently pegged at $262 million, indicating growth of 2.7% from the year-ago reported figure. The consensus estimate for its Flow Control Division segment’s revenues stands at $616 million, indicating a decline of 8.1% year over year.

Supply chain issues and disruptions in the distribution channel are likely to have dragged Flowserve’s performance. Higher raw material prices and shortage of skilled labor might also have affected Flowserve’s margins and profitability in the quarter. However, the company is anticipated to have benefited from a solid backlog level, strong backlog conversion capability, and its multi-year Flowserve 2.0 strategy in the quarter.

Although Flowserve’s realignment plan will benefit it in the long run, it has been increasing its expenses. For 2021, the company anticipates incurring realignment expense of $25 million. In the first and second quarters of 2021, its net income was adversely impacted by realignment expenses of 8 cents and 2 cents per share, respectively. The trend is likely to have continued in the third quarter as well. However, its focus on cost-saving measures is likely to have supported its margin performance.

The company, which generates significant revenues from overseas operations, has been vulnerable to foreign exchange issues. This might have affected its performance in the to-be-reported quarter.

Earnings ESP: Flowserve has an Earnings ESP of -2.31% as the Most Accurate Estimate is pegged at 39 cents, lower than the Zacks Consensus Estimate of 40 cents.

The Middleby Corporation (MIDD - Free Report) has an Earnings ESP of +1.54% and a Zacks Rank of 3 at present. You can see the complete list of today’s Zacks #1 Rank stocks here.

Columbus McKinnon Corporation (CMCO - Free Report) has an Earnings ESP of +5.26% and a Zacks Rank of 2, at present.