Tesla reported third-quarter 2021 earnings of $1.86, which surpassed the Zacks Consensus Estimate of $1.39 and rose from 76 cents a share recorded in the year-ago period. Total revenues came in at $13,757 million, beating the consensus mark of $13,163 million. The top line also witnessed year-over-year growth of 56.8%. Tesla currently carries a Zacks Rank #2 (Buy). You can see the complete list of today’s Zacks #1 Rank (Strong Buy) stocks here.

Autoliv came out with third-quarter 2021 earnings of 73 cents per share, missing the Zacks Consensus Estimate of $1.02. This compares unfavorably with earnings of $1.48 per share a year ago. The company posted revenues of $1,847 million, missing the Zacks Consensus Estimate of $1,889 million and declining from the year-ago figure of $2,037 million.

Volkswagen’s Skoda Auto announced early last week that it has halted most of its operations at its Czech plants for two weeks amid the global shortage of microchip supply. The company has kept only one production line operational at the Kvasiny plant and intends to complete 10,000 work-in-progress vehicles. The auto biggie expects semiconductor issues to gradually abate only within second-half 2022.

Renault notified that it would trim output by 500,000 cars this year, more than double its prior forecast of 220,000 units amid persistent supply chain disruptions. The firm’s CFO Delbos is of the view that the chip shortage should ease a bit by 2021-end but would remain constrained for much of 2022. Amid chip woes, Renault’s inventory fell to 340,000 cars at third quarter-end from 470,000 in the year-ago period.

As a result of lower-than-expected light vehicle production amid the shortage of semiconductor supply, auto equipment manufacturer Magna has trimmed sales projection. It now expects 2021 revenues in the band of $35.4-$36.4 billion, down from the previous guided range of $38.0-$39.5 billion. Amid higher commodity costs and operational efficiencies, Renault has also slashed margin forecast. The company now expects EBIT margin within 5.1-5.4%, down from the previous projection of 7-7.4%.

AutoNation inked a deal to acquire Priority 1 Automotive. Subject to satisfactory closing conditions, the deal is expected to close in fourth-quarter 2021. The deal would add approximately $420 million in annualized revenues. Together with the previously announced acquisition of Peacock Automotive Group, AutoNation’s total annualized revenues acquired in 2021 so far total $800 million.

Group 1 Automotive announced the acquisition of Capital City Honda in California. The buyout is likely to help the former generate $85 million in annualized revenues. Group 1 has completed $655 million of acquired revenues so far this year. The latest acquisition brings Group 1's U.S. dealership count to 120. 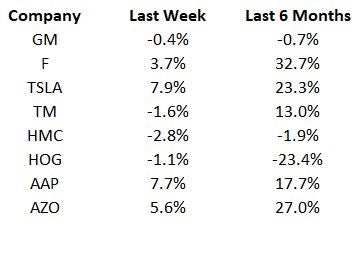 In the past six months, all stocks but General Motors, Honda and Harley-Davidson have registered gains. The past week also displayed a mixed performance, with Tesla registering the maximum gains and Honda losing the most.

Industry watchers will keep a tab on September commercial vehicle registrations, to be released by the European Automobile Manufacturers Association this week. Meanwhile, investors are awaiting third-quarter earnings releases of auto giants including General Motors, Ford, Harley-Davidson and PACCAR, which are scheduled for this week. Also, stay tuned for updates on how automakers will tackle the semiconductor shortage and make changes in business operations.

CRISPR (CRSP) to Report Q3 Earnings: What's in the Cards?