The electric vehicle (EV) revolution is speeding up, with legacy automakers leaving no stone unturned to establish a strong foothold in this domain and setting ambitious targets to electrify their fleet. Last week, Toyota (TM - Free Report) bet big on the U.S. electric future with a $3.4-billion investment. In a bid to step up its EV prowess, Stellantis (STLA - Free Report) inked joint venture deals with LG Energy Solution and Samsung SDI. Ford (F - Free Report) announced plans to invest $300 million for manufacturing EV components in Europe, as it plans to go all-electric in the continent by the decade-end. Such has been the frenzy surrounding electrified vehicles that Apple iPhone maker Foxconn is also set to capitalize on the same. The Taiwan-based electronics giant is set to bet on the green mobility future with three EVs that it plans to bring to the market: an electric SUV, a flagship sedan, and an electric bus, labeled the Model E, Model C, and Model T, respectively.

Toyota will invest $3.4 billion (380 billion yen) for automotive battery development and production in the United States through 2030. The investment, which is supposed to come from Toyota’s North American arm, involves the plan to establish a new company and build an automotive battery plant in the United States in collaboration with Toyota Tsusho. The plant, anticipated to start production in 2025, involves an outlay of $1.29 billion for expansion until 2031, resulting in the creation of 1,750 new jobs. The venture will initially focus on producing batteries for hybrid EVs. The new company's activities will also include aiding Toyota in enhancing its local supply-chain network and production expertise related to lithium-ion automotive batteries.

Stellantis entered into a joint venture deal with LG Energy Solution to develop battery cells in North America. Per the deal, the companies will jointly establish a battery factory having an annual capacity of 40 gigawatt-hours (GWh) that will be functional by first-quarter 2024. Stellantis also announced its collaboration with Samsung SDI for battery production in North America. With Samsung, it will develop a plant with an initial annual capacity of 23 GWh, having an expansion capacity up to 40 GWh. This plant is expected to become operational in 2025. The agreements are in sync with Stellantis’ plans to invest more than €30 billion throughout 2025 in electrification and software development.

Ford announced plans to spend more than $300 million to manufacture EV parts and components in Europe. In this regard, the U.S. auto biggie intends to convert the Halewood factory in northern England into a facility that will engage in the development of electric power components for green vehicles. The Halewood plant, with a production capacity of 250,000 power units per year, will begin manufacturing the parts by mid-2024. This marks Ford’s first European in-house location to make EV parts and an important investment, as it plans to go all-electric in the continent by 2030. 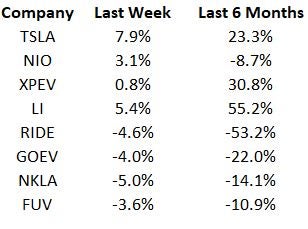 In the past six months, all stocks have decreased, apart from Tesla, XPeng and Li Auto. Lordstown bore the maximum brunt, with shares declining 53.2%. The past week also displayed a mixed price trend, with Nikola being the worst performer and Tesla registering the maximum gains.