Barring one-time items, adjusted earnings in the reported quarter were $2.09 per share. The figure topped the Zacks Consensus Estimate of $2.07.

Sherwin-Williams posted revenues of $5,146.7 million, up 0.5% year over year. The figure surpassed the Zacks Consensus Estimate of $5,105.8 million. While the company benefited from strong demand in its pro-architectural and industrial end markets, it faced headwinds from raw material supply chain challenges.

The Americas Group segment registered net sales of $2,967 million in the third quarter, down 0.4% year over year. The downside was primarily caused by reduced sales volume of paint products as a result of raw material availability issues, partly offset by selling price increases in all the end markets.

Net sales in the Consumer Brands Group segment declined 22.8% year over year to $646.7 million. The downtick was mainly due to lower sales volume to all of its retail consumers and the Wattyl divestiture.

Net sales in the Performance Coatings Group increased 17.4% year over year to around $1,532.5 million in the reported quarter. The upside was mainly driven by higher sales volumes in all end markets served and higher selling prices.

The company repurchased around 8.1 million shares of its common stock in the first nine months. It had remaining authorization to repurchase roughly 50.58 million shares through open market purchases at the end of the quarter.

The company expects consolidated net sales to increase mid-to-high single digit percentage in the fourth quarter. For 2021, it is expected to increase high-single digits. The company also expects adjusted earnings per share for 2021 between $8.35 and $8.55.

Shares of Sherwin-Williams have gained 38% in the past year compared with a 31.5% rise of the industry. 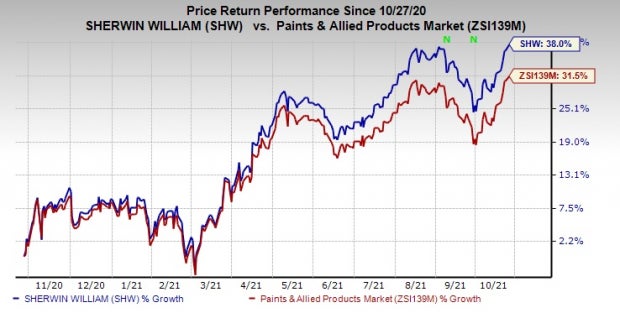 Nucor has a projected earnings growth rate of around 580.2% for the current year. The company’s shares have soared 126.9% in a year. It currently sports a Zacks Rank #1 (Strong Buy). You can see the complete list of today’s Zacks #1 Rank stocks here.

Chemours has an expected earnings growth rate of around 86.9% for the current year. The company’s shares have gained 44.2% in the past year. It currently carries a Zacks Rank #2 (Buy).

Olin has an expected earnings growth rate of around 688.9% for the current year. The company’s shares have surged 248.8% in the past year. It currently flaunts a Zacks Rank #1.

What's in Store for Raymond James (RJF) in Q4 Earnings?