Pioneer Natural Resources Company (PXD - Free Report) recently announced that it has lost millions in hedging in an SEC filing. The company incurred a $501-million loss in the third quarter on oil and gas hedging, as commodity prices jumped to multi-year highs.

The WTI Crude price index is currently hovering well above the $80 per barrel mark versus last year’s historic lows. At one point in April 2020, the WTI price plunged to the negative territory. Natural gas prices also witnessed a massive jump in the past few months. Recently, it rose to the $6 per MMBtu mark from last year’s significant lows. Oil and gas producers like Pioneer Natural hedged their output to reduce risks and increase cash flow visibility.

The tremendous increase in commodity prices has well positioned the upstream operators who chose to hedge their production for millions of dollars of losses in the third quarter. Pioneer Natural’s hedging loss for the first nine months of 2021 climbed to more than $2 billion. Another producer, SM Energy Company (SM - Free Report) incurred millions of hedging losses during the second quarter and might have done the same in the third quarter as well.

EOG Resources, Inc. (EOG - Free Report) , a major shale player, paid $193 million in hedge settlements in the second quarter. Diamondback Energy, Inc. (FANG - Free Report) is another shale producer that is expected to incur losses on bad bets. On the contrary, companies with limited hedging are bound to gain from this situation as their profits will not be significantly capped.

Pioneer Natural is slated to report third-quarter earnings on Nov 3, after the closing bell. The Zacks Consensus Estimate for earnings per share is pegged at $3.92, indicating a massive jump from the year-ago period’s 17 cents.

Its shares have gained 35%, underperforming the industry’s 30.3% rally in the past three months. The company currently carries a Zacks Rank #2 (Buy). You can see the complete list of today’s Zacks #1 Rank (Strong Buy) stocks here. 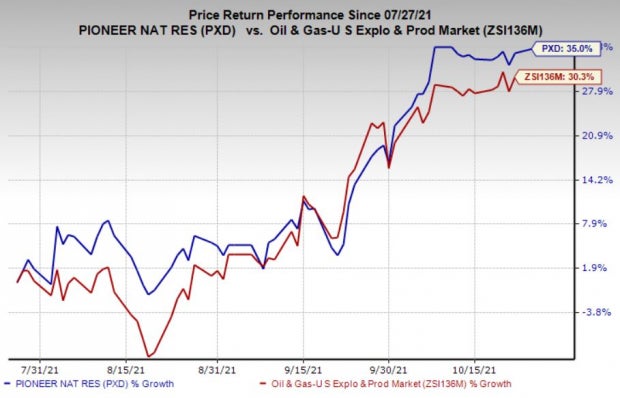