Adjusted earnings per share of $1.65 beat the Zacks Consensus Estimate by 10.7% and grew 17% year over year. Total revenues of $3.83 billion beat the consensus mark by 1.9% and improved 10% year over year on a reported basis as well as on an organic constant-currency basis. 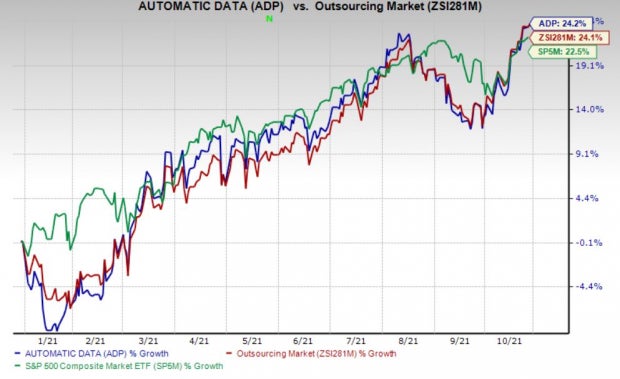 Employer Services revenues of $2.57 billion increased 8% on a reported basis as well as on an organic constant-currency basis. Pays per control increased 7% year over year.

Adjusted EBIT increased 17% year over year to $915 million. Adjusted EBIT margin grew 140 basis points to 23.9%. The uptick was backed by higher operating revenues, which were partially offset by the effect of increased selling expenses and implementation costs.

ADP exited first-quarter fiscal 2022 with cash and cash equivalents of $1.60 billion compared with $2.58 billion in the prior quarter. Long-term debt of $2.99 billion was flat sequentially.

The company generated $121.9 million of cash from operating activities in the quarter. Capital expenditures were $35.9 million. The company paid out dividends worth $393.2 million and repurchased shares worth $528 million.

Equifax’s (EFX - Free Report) third-quarter 2021 adjusted earnings of $1.85 per share beat the Zacks Consensus Estimate by 7.6% but declined on a year-over-year basis. Revenues of $1.22 billion outpaced the consensus estimate by 3.6% and improved 14.5% year over year on a reported basis and 14% on a local-currency basis.

IQVIA’s (IQV - Free Report) third-quarter 2021 adjusted earnings per share of $2.17 beat the consensus mark by 1.9% and improved 33.1% on a year-over-year basis. Total revenues of $3.39 billion outpaced the consensus estimate by 1% and increased 21.7% year over year on a reported basis and 21.1% on constant-currency basis.

How is Williams Companies (WMB) Placed Ahead of Q3 Earnings?