1. Alaska Air’s third-quarter 2021 earnings (excluding 6 cents from non-recurring items) of $1.47 per share surpassed the Zacks Consensus Estimate of $1.29. In the year-ago period, the company incurred a loss of $3.23. Operating revenues of $1,953 million outperformed the Zacks Consensus Estimate of $1,932 million. The top line surged more than 100% year over year with passenger revenues, accounting for 90.8% of the top line, soaring above 200%, courtesy of improvement in air-travel demand from the pandemic-led lows. For the fourth quarter, Alaska Air expects capacity to decline approximately 13-16% from the comparable period’s level in 2019. The company estimates economic fuel cost per gallon in the band of $2.20-$2.30.

2. Southwest Airlines incurred a loss (excluding 96 cents from non-recurring items) of 23 cents per share in the third quarter of 2021, narrower than the Zacks Consensus Estimate of a loss of 27 cents. This marks the company’s seventh consecutive quarterly loss. Operating revenues of $4,679 million outperformed the Zacks Consensus Estimate of $4,581.5 million and also jumped more than 100% year over year. Passenger revenues, which accounted for 90.3% of the top line, totaled $4,227 million, reflecting an improvement of more than 100% year over year. Management estimates lingering effects from the deceleration in bookings witnessed in the third quarter to impact the fourth-quarter operating revenues by approximately $100 million.

3. American Airlines’ third-quarter 2021 loss (excluding $1.24 from non-recurring items) of 99 cents per share compared favorably with the Zacks Consensus Estimate of a loss of $1.04. Quarterly loss per share was also narrower than the year-ago loss of $5.54. Operating revenues of $8,969 million skyrocketed 182.67% year over year and also surpassed the Zacks Consensus Estimate of $8,926.6 million. This massive year-over-year jump reflects improving air-travel demand. Revenues increased 20%, sequentially. American Airlines expects system capacity for the December quarter to decline in the 11-13% range from the figure reported in fourth-quarter 2019. Total revenues in the fourth quarter of 2021 are anticipated to decline 20% from the level recorded in fourth-quarter 2019. Fuel cost per gallon in fourth-quarter 2021 is expected in the $2.43-$2.48 band.

4. JetBlue Airways incurred a third-quarter 2021 loss (excluding 52 cents from non-recurring items) of 12 cents per share, comparing favorably with the Zacks Consensus Estimate of a loss of 19 cents. This was the seventh successive quarterly loss posted by the low-cost carrier. Quarterly loss per share was also narrower than the year-ago loss of $1.75. Revenues for the fourth quarter of 2021 are expected to decline in the 8-13% range from the fourth-quarter 2019 actuals. Capacity is anticipated to decline in the 4-7% range for the December quarter from the figure reported in the fourth quarter of 2019. Average fuel cost per gallon in the December quarter is estimated to be $2.49.

Passenger revenues (contributing 89.2% to the top line) surged to $454 million from $39.8 million a year ago as more people took to the skies following the ramp-up in vaccination. Airline traffic, measured in revenue passenger miles, surged in excess of 1625% year over year in the quarter under review. Capacity (measured in available seat miles) expanded 488.7% as the airline increases the same to meet the uptick in demand. Load factor (percentage of seats filled by passengers) expanded 50.3 percentage points to 75.9% for scheduled operations. Passenger revenue per ASM (PRASM) ascended 93.9% to 10.84 cents. Average fuel cost per gallon (economic) rose to $2.07 from $1.24 a year ago. Unit cost (excluding fuel and non-recurring items) declined 74.9% to 10.28 cents in the September quarter. 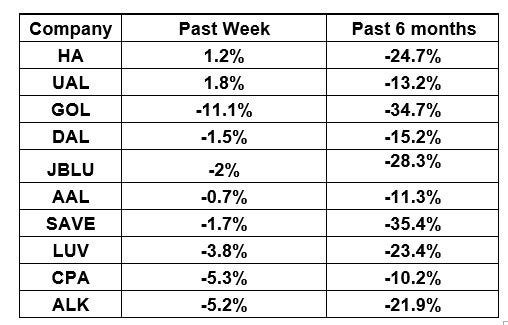 Investors will await the third-quarter 2021 earnings report of SkyWest (SKYW - Free Report) , scheduled to be released on Oct 28.