Phillips 66 (PSX) to Acquire Its Pipeline Partnership for $3.4B

Phillips 66 (PSX - Free Report) entered an agreement with its master limited partnership (“MLP”), Phillips 66 Partners (PSXP - Free Report) , to acquire all of the latter’s units, which it does not already own, for $3.4 billion.

The acquisition is part of Phillips 66’s plans to simplify its governance and corporate structure. The deal also comes as the company recovers from the pandemic-induced lockdowns, significantly reducing global energy demand.

The deal is expected to complete in the first quarter of 2022. Following the deal closure, Phillips 66 Partners will be a wholly-owned subsidiary of Phillips 66 and will no longer be a publicly traded partnership.

The transaction is the latest in MLP roll-ups involving pipeline operators. Recently, pipeline firms have been restructuring as U.S. regulators claimed that they would no longer be allowed to recover an income tax allowance as part of the fees charged to shippers under a cost-of-service rate structure.

Earlier, the MLP structure was common among U.S. pipeline operators, and energy companies endorsed billions of dollars in pipeline and storage products under MLPs. The spin-off of pipeline businesses into MLPs was a widely-used approach for oil and gas companies to attract capital.

However, the structure became unpopular after changing the U.S. tax policy, which hammered MLP stock prices. In December 2020, TC Energy Corporation (TRP - Free Report) announced a similar roll-up to acquire all of the remaining outstanding units of its subsidiary TC PipeLines. The transaction closed in March and TC PipeLines is no longer a publicly-held MLP.

Shares of the company have underperformed the industry in the past three months. The stock has gained 4.8% compared with the industry’s 14.6% growth. 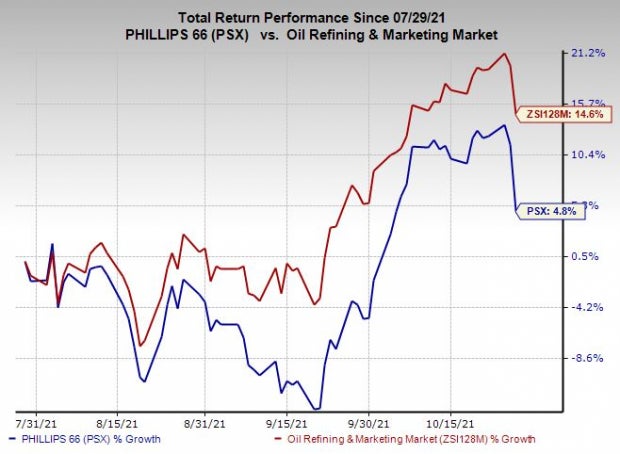